STATS CENTRAL: Bushies back it up 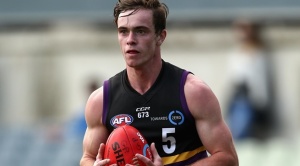 For the beaten 2016 Grand Final team, the Murray Bushrangers have quietly gone about building a 5-1 record to sit second on the TAC Cup ladder.

Murray produced a competition-high 10 players added to AFL lists last year, including NAB AFL Draft pick no.12 Jy Simpkin who has impressed in five senior games for North Melbourne so far in 2017.

Second-year Bushrangers head coach Leon Higgins admitted earlier this year that it’d be difficult for his 2017 group to match the deeds of last year’s, but that they’ll “be more than competitive throughout the season”.

When asked about potential 2017 draftees, Higgins pointed firstly to Charlie Spargo – but the classy 175cm midfielder/forward hasn’t played a TAC Cup game this year due to commitments with the NAB AFL Academy and GWS Academy (of which he’s no longer a part).

Instead, a collection of unheralded players is emerging to record impressive numbers through the first six rounds.

Over-age defender Ben Paton (pictured) has been one of Murray’s most consistent players averaging 23 disposals and six marks per game running off half back, and was in his team’s best players for its Round 6 victory over the Calder Cannons with 19 disposals and five rebound-50s.

Jessy Wilson was also crucial against the Cannons with three goals and the 184cm top-ager now leads the Bushrangers goalkicking table with 11, ahead of 196cm Daniel Johnston (10 majors) and livewire indigenous prospect David Smith (nine).

On a wet day at Rams Arena, the grunt of co-captain Harry Jones (averaging 23 disposals and six tackles per game) and over-agers Isaac Wallace (17 and six) and Nick Richards (21 and three) was important, while Doulton Langlands – a bottom-ager in Murray’s Grand Final team – stood out with 21 disposals and six inside-50s.

Add in the ball-winning ability of 170cm Angus Hicks (ave. 24 disposals and six tackles) and marking power of 195cm Jordon Butts (ave. 17 disposals and eight marks) and suddenly the Bushrangers seem to have enviable depth of talent.

They may not be as well known as Simpkin and Will Brodie may have been in 2016, but they’re proving just as effective for their team.

Round 6 keys to victory:

23: The Eastern Ranges had 11 fewer inside-50s and three fewer scoring shots than the Gippsland Power in their two-point victory but clearly made their forward thrusts count. Rowville product Trent Mynott’s damaging boot was a key factor for the Ranges, sending the ball inside 50 six times from his round-high 23 kicks.

19: The Bendigo Pioneers reaped the rewards of going direct in a 21-point win against the Sandringham Dragons. The Pioneers had 31 fewer disposals than the Dragons but recorded 13 more kicks, with Echuca product Darby Henderson and Strathfieldsaye junior Angus Schumacher racking up 19 disposals each by foot.