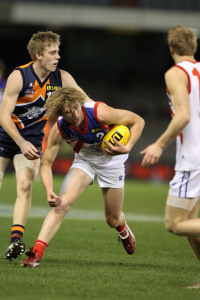 Former Gippsland Power player and Morrish Medal winner Dyson Heppell has been named the 2011 NAB AFL Rising Star. Selected at pick eight in the 2010 NAB AFL Draft by Essendon, Heppell has had an outstanding year for the Bombers, playing in all matches and averaging 21 possessions a game.

His TAC Cup club Gippsland Power were very proud of their former players’ achievements when they found out the news – being the first Power player to receive the Rising Star Award.

“We are very proud of Dyson and his achievements as he is an outstanding individual on and off the field.

“Last year he taught the boys how to conduct themselves off the football field and on, and was a great example to them,” Gippsland Power Region Manager Peter Francis said.

“Preparation was a key part of his training, which is obviously so important at the elite level.

“It is no surprise to us that he has had the season he has, after what we saw of him during his time at Gippsland Power.”

“He was a super impressive player. His footy speaks for itself,” Carroll said.

“He is a fine young kid who works hard, and was really diligent with everything that he did.”