Stingrays Return Home With A Win 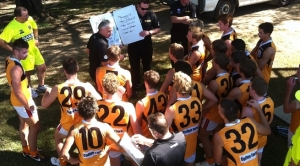 The Dandenong Southern Stingrays continued on their winning way with a very strong 45 point victory over the Queensland Scorpions in the Round 7 TAC Cup match last Saturday, which was played in lovely sunny weather at the home of AFL Queensland Yeronga Park, Brisbane.

The Stingrays added highly touted draft chance Lachie Whitfield and fellow Peninsula School team mate James Hammond, who both had a bye in AGS school football commitments, but lost Billy Hartung on Thursday might to an ankle injury which gave Nicholas McPherson his second game. The Stingrays had trained well during the week after being very disappointed in the loss from last week to Oakleigh and prepared well for interstate travel. The Scorpions were pumped from the word go and with twin tower ruckmen (200cm) controlled the stoppages for the first 5 minutes, but to the credit of the Stingrays midfield they nullified their dominance in the air.

Lachie Whitfield scored the first major at the five minute mark after some clever body work, but Queensland would be disappointed with their outcome on the scoreboard as they wasted many opportunities inside their 50. A second goal a few minutes later to the Stingrays came through Tim McGenniss after some great crumbing off the pack. Queensland then took it straight out of the middle and kicked their first and continued to control the play inside their fifty but couldn’t penetrate the goals mainly due to some great backline defence and midfield pressure. A lack in concentration saw a defence kick turnover and the Scorpions added their second major. Clayton McCartney kicked truly after being awarded a free kick after a great defensive rundown tackle but once again the Scorpions replied after the centre stoppage. At quarter time the Stingrays trailed 3-3-21 to 3-4-21.

The second term started well for the home team as they scored the first goal. Jake Calvert took control in the Ruck and Tim McGenniss, Billy Rolfe and the Newman brothers’ locked down and lifted their intensity and pressure on the young Scorpions team. It became a game of defence’s played between the arcs and the wings for both teams played a pivotal role in scoring assists. Ryan Marks Logan drifted back into space and kicked the Stingrays first goal, followed a few minutes later by some magical and creative play from lively forward Clayton McCartney kicked another major and a very gutsy and brave mark to Josh Newman kicked truly 45 metres out. Queensland kicked a quick reply goal once again after a centre stoppage dominance. During the long term break, Stingrays Coach Graeme Yeats was full of praise to his players for continuing to play their individual role, but challenged them to work harder defensively and to use the ball better in contested and uncontested situations- especially entering the forward line. At the end of the second, the Rays had a 4 point buffer over the ever trying Queensland Scorpions, but the signs were good as they were cleaner with the ball when moving it around the ground.

The third saw the first goal come within a minute to Stingrays player Jake Calvert after a huge contested grab 45 metres out. Another goal to Lachie Whitfield a few minutes after some good defensive pressure looked like the Stingrays might blow the game apart. The heat which all thought would be a factor for the travelling Stingrays seemed to affect the Scorpions more who seemed to completely shut down and stop their run and chase. Clayton McCartney seized the opportunity of space and kicked two goals for the quarter and could have had three more. The ever hard working Taylor Garner got into the act and took a nice pack mark and never looked like missing from the long range. Nathan Foote got an opportunity to go forward and he rewarded the coaching staff with a goal after numerous defensive pressure acts. It was a complete dominance and at the end of the third the Rays held a 32 point lead.

The final term was harder running and hard work as the Stingrays continued to outplay and out-muscle the struggling Scorpions. Another 5 goals quarter with 10 different players on the goal kickers’ list indicated a very even team effort and should instill a lot of confidence in the Stingrays squad. The non-negotiables of hard work, hard running, good defense and multiple avenues to goal were all front and centre in the very good 45 point win to the Stingrays and only allowing 5 goals defensively after half time which was led by best on ground Jake Calvert who racked up plenty of possession, most from winning his own ball from contested contests then rebounding inside 50 and was also supported strongly from the ever reliable Captain in Nic Tuddenham, Ryan Morrison, Billy Rolfe, Josh Westerman and Clayton McCartney who loves a goal.

It was great to have ex Stingrays player and ex Brisbane Lions player Travis Johnston join us for dinner on Friday night and at the game on Saturday. The players ate up every piece of advice he gave and we wish Travis and all ex Stingrays graduates all the best with their football this year.

Next Saturday, May 19th the TAC Cup Round competition has a Bye for state trial games for Vic Country and Vic Metro. The Dandenong Stingrays have 11 players still in the squad of 50.