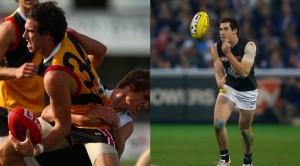 Former Dandenong Stingrays player, Andrew McInnes made his much awaited AFL debut on Friday evening for the Carlton Football Club when they delivered the upset of the round by knocking off Collingwood at the MCG.

The 191cm disciplined backman was recruited by Carlton in the 2010 NAB AFL Draft with a fourth round selection as number 67 overall.

2011 saw McInnes play most of his football in the Peter Jackson VFL for the Northern Blues before suffering a season ending shoulder injury.

McInnes complemented the Carlton backline by taking strong contested marks and showcasing his ability to run and create play.