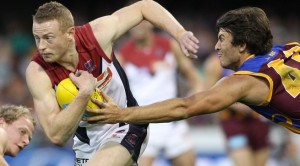 Sam Blease from the Melbourne Football Club is the Round 20 NAB AFL Rising Star nominee.

Sam was recruited from the Eastern Ranges with selection 17 in the 2008 NAB AFL Draft. 2009 saw him suffer a setback when he broke his leg and was sidelined for the first 16 rounds of 2010.

Sam found form again whilst playing for VFL affiliate Casey and made his AFL debut in Round 15, 2011.

The 21-year-old utility was best on ground for the Demons against St Kilda last Saturday at the MCG.  He kicked a career-best five goals, gathered 20 possessions and took eight marks.

This is Sam’s second NAB AFL Rising Star nomination. He was nominated in Round 23 last year, but was still eligible in 2012.

“Sam has progressed a fair way this year. His offensive talents are on show for everyone to see, but he also shown a real work ethic.

“He is working really hard on the aspects of the game he needs to improve,” Neeld said.

Sam Blease is the 17th former TAC Cup player to be honoured with a NAB AFL Rising Star nomination in 2012.