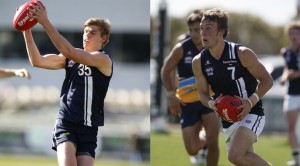 The Geelong Falcons have averaged a minimum of four draftees a year since 2006, and have the best record of any TAC Cup region with over 80 players selected in the AFL Draft over the years. In what was very much a first year Geelong Falcons line up in 2012, the Falcons saw two draftees selected last week. Falcons Talent Manager Michael Turner was full of praise for the regions two selections at the draft, but thought the Falcons were a good chance to again see four players drafted in 2012.

“Overall the draft was pleasing as these players worked hard to enter the AFL.

“We were disappointed our ruck man Darcy Fort and Best & Fairest Tom Gribble were not drafted but are positive they will be picked up in Rookie draft,” Turner said.

The two Falcons players drafted both experienced Vic Country selection in 2012, and will be handy additions to their respective AFL Clubs.

“Mason Wood went later than expected but is a great pick for the Kangaroos.

“Josh Saunders is a perfect fit for St.Kilda as he has speed and endurance to run through the midfield.

“Josh will be an effective run with player as his midfield game develops.”

After the draft both AFL Clubs commented on their new Falcon selections.

North Melbourne Recruiting Manager Bryce Lewis had the following to say about Wood: “Mason is a kid who played as a key forward this year. He's very athletic, covers the ground really well and is a really smooth mover. He's a left-footer who can really take a good overhead mark.

“The Falcons didn't have a lot of marking targets inside 50 this year, so perhaps he was required to play as that target. But he showed during the national championships that he can get up on a wing and really be a creative ball user, bring the ball back inside 50,” Lewis said.

“We think with his running capability, game sense and decision-making he can play up the ground and perform other roles.”

“He is a very determined young man and can really carry the ball. He has good speed and endurance. He is a good person who tested well at the combine and runs hard from start to finish.”