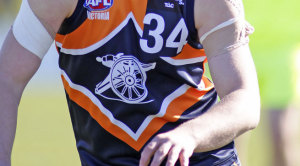 The North Ballarat Rebels slow start to the season continued last Saturday in round five of the TAC Cup going down to the Calder Cannons by nine goals in difficult conditions at Highgate Reserve. The Rebels are now cemented at the bottom of the ladder and will find it tough to get their season on track, as Shane Goss reports.

The Cannons had first use of the wind but often blazed away neglecting their options up forward, intent on using the wind to go long. North Ballarat’s effort and spirit at the contest was encouraging and they restricted the Cannons to just the one goal for the term.

Playmakers Matt Crouch and Lachlan Cassidy were getting their hands on the footy and the scoreboard at the break didn't reflect the state of play. In the second quarter the momentum changed as the Cannons worked harder when going forward and began to find targets.

All the good work from the Rebels in the opening quarter was not able to be capitalised on in the second term. Despite having the wind at their backs they failed to score a goal and went to the main break 20 points in arrears.

Rebel's coach, David Loader, was furious with his team, urging them for more commitment and effort. It had been a 'nine out of ten' first quarter' followed by a 'two out of ten' for the second he told them.

Next door in the Cannon's rooms, Andrew Jago was instructed his players to 'lower their eyes' and 'look for targets' kicking with the wind, calling for 'discipline, composure and work-rate' in the second half.

He would have been pleased with what he saw as the Cannons put the game beyond doubt in the third term scoring six goals and holding the Rebels scoreless. Anthony Prestia was superb running off the half-back line and James Ferry repelled any Rebels attacks.

Small forwards Josh Cauchi and Paul Ahern capitalised up forward and Jake Lever was having a day out.

Crouch, Cassidy and ruckman Kyle Hendy were doing their best to keep their team in the game but the Cannons run and teamwork was too much. It took until the seven minute mark of the final quarter when Josh Webster marked directly in front and kicked truly to register the Rebels first goal for the game.

They outscored the Cannons by four points to win the term; however, by this time the Cannon's run had faded kicking into the strong wind. The Rebels could be pleased with their first and final quarters but their in-ability to sustain their work rate for the whole game let them down.

The Cannons used the ball better and had eight different goal-kickers confirming their options going forward. They jump into the top-eight and head interstate in round six to play the Queensland Scorpions.

North Ballarat remains winless and the task to find their first win won't be easy at home to the Sandringham Dragons this week.