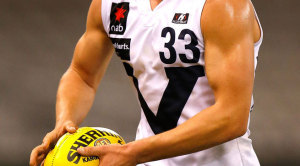 A supremely talented Victoria Country squad will travel to Darwin this weekend to tackle Northern Territory in Round 1 of the NAB AFL U18 Championships.

Eleven players from the Geelong Falcons and 10 from the Gippsland Power are in the final squad of 40 players, and are likely to lead Vic Country’s charge in the Top End.

The trio are likely to be rested from the Northern Territory clash to give some of the squad’s younger and less experienced players a chance to shine at the national level.

Murray Bushrangers clearance king Nick Holman and Bendigo Pioneers inside-midfielder Jake Maher are likely to benefit from the absence of some of the more high-profile names, while Zachary Merrett (Sandringham Dragons) will line-up thanks to his Cobden origins.

North Ballarat Rebels tough-nut Matt Crouch has a broken hand and will miss the opening matches of the Championships but remains a chance to line-up in the Division One encounters, which begin in mid June.

Scott sits at the top of the TAC Cup goalkickers list with 26 majors from six matches so far this season, while McCartney (14) has also proved a difficult match-up for opposition defenders.

Vic Country Academy High Performance Manager Leon Harris said the squad would need to be at its best to produce results.

“It’s a talented squad, there is no doubting that,” Harris said.

“But they have proved nothing until they can play well against quality opposition.”

Vic Country will play five games in total over six weeks, with their next match following the Northern Territory clash, scheduled for Saturday June 9 at Visy Park against Tasmania – see full fixture below.