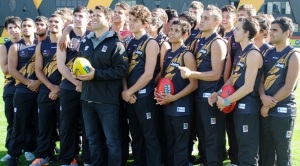 The squad of 50 will converge on Melbourne from all over Victoria on Friday for the second of three training camps this season, which also includes a match against the Western Jets.

After the success of the first camp, eight young players from regional Victoria, including two from Mildura, have been added to the program and will get their first taste of what the Laguntas program has to offer this weekend.

The three day camp will give the squad a chance to learn from the likes of Brisbane Lions Premiership star Chris Johnson (Head Coach of Laguntas) and Terry Wallace (Director of Coaching) and continue a specially designed off-field development program.

The team will again utilise the Korin Gamadji Institute facilities based at Richmond Football Club, and undertake accredited education and training facilitated by AFL SportsReady.

Education sessions on nutrition, rehabilitation and injury prevention will be held in conjunction with sessions on strengthening links to the players’ cultural heritage.

Four-time Olympian Steve Moneghetti will also speak to the group about goal setting and leadership, while the squad will conduct an Aboriginal Heritage walk through the botanical gardens.

As part of the ongoing game development, the Laguntas members will review their first match against the Victoria Country U16 side with players to receive GPS data and testing results to bench mark against players at the elite level.

AFL Victoria Indigenous Programs Manager Aaron Clark said the program also tracked the progress of participants’ schooling and measured things such as literacy levels and standards across the board.

“The aim of the Laguntas program is to obviously give these youngsters a chance to reconnect with the mainstream talent pathway, but it’s also about helping them become leaders in their communities,” Clark said.

“We identified that kids who graduated from the Kickstart program (U15 and U16 level) were falling out of the mainstream talent pathway for a variety of reasons.

“Through the Laguntas Program we are able to bridge that gap and hopefully give indigenous youngsters a better opportunity to play TAC Cup football. “

Clark said that since the first camp, two players have achieved important milestones in their football careers.

“Since we first got together in June, Patrick Kelly-Briggs has played his first TAC Cup game for the Northern Knights and Ethan Davis has been added to the Bendigo Pioneers’ list and begun training with the team.

While there are many more youngsters who will be hoping to transition from the Laguntas program onto a TAC Cup list for the next season, Clark it was also an important opportunity for those already entrenched in the pathway to develop their off-field skills.

“For guys like Jay Kenned-Harris, who obviously played for Vic Metro and is captain of the Oakleigh Chargers, the camps are an important way of helping them connect with their cultural identity and interact with their peers.

“It’s also great to have these guys in the mix to be an example of what other kids can achieve if they remain dedicated.”

The Western Jets region will use the match on Saturday to give their under-age players a chance to shine and will be reinforced by members of the Majak Daw Squad, an initiative aimed at supporting and attracting talented footballers in the Western region with a multicultural background.

See the Laguntas team take on the Majak Daw Squad at 9:30am Saturday at Crofts Reserve.