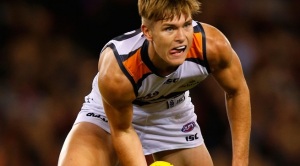 Tomlinson was a standout in the GWS GIANTS’ loss to Essendon at Skoda Stadium last Saturday, collecting 23 possessions, including a game high nine marks, four tackles and a goal.

The Round 17 match marked Tomlinson’s best AFL game to date during a season that sees the 19-year-old averaging more than 15 disposals and seven marks per game.

GIANTS coach Kevin Sheedy said it was reward for the consistency Tomlinson had shown in his second year in AFL football.

”Last year Adam was in and out of the side but this year with another pre-season under his belt he has strung a number of games together and has taken 83 marks for the season, which puts him at number one for the club and three ahead of Jeremy Cameron,”  Sheedy said.

“We are pleased with his continued development and he is obviously enjoying being in Sydney and has re-signed until the end of 2015 along with a number of our young players.”

After being selected by the GIANTS with pick number nine in the 2011 NAB AFL Draft, Tomlinson made his AFL debut in Round 1, 2012 against the Sydney Swans.

He went on to play nine games for the club in his first year, averaging 11 disposals a game, and has continued to impress throughout his 11 matches in 2013.

The former Oakleigh Charger – one of seven players from the club selected at the 2011 NAB AFL Draft - is an AIS/AFL Academy graduate and was a standout performer at the 2011 NAB AFL Draft Combine, ranking in the top ten for both kicking and endurance running. He is the second NAB Rising Star nominee from Greater Western Sydney this year, following Lachie Whitfield’s nomination in Round 10.