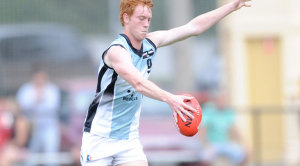 After a standout season with the Rebels, Herbert was named the TAC Cup Coaches Award winner.

After playing mainly as a forward during the 2012 TAC Cup season, Herbert enjoyed more time in the the Rebels’ midfield ranks this year.

The lanky 19-year-old thrived in his new role averaging 18.2 disposals in 12 games this season.

Stats wise his best performance came in round seven against the Northern Knights when he had 29 kicks in 34 possessions.

Herbert was one of his team’s best players most weeks and at one stage was named his side’s best player in five consecutive matches.

His stellar form resulted in selection in the Vic Country squad, where he appeared four times in the National Championships.

His composure and ability to play in variety of positions has many believing he could be selected in the 2013 NAB AFL Draft.

Returning for a third season at TAC Cup level, Scott won the competition goal kicking with 51 majors, finishing 18 goals ahead of his nearest challenger in Christian Petracca.

Scott played 13 games this year, kicking four or more goals in a match on nine occasions.

His best effort was in round three when he bagged nine goals in the Power’s big win over the Bendigo Pioneers.

Scott’s form in the forward 50 saw him gain a place in the Vic Country squad where he made two appearances in the Big V jumper.

Through the TAC program, each TAC Cup regions are encouraged to promote the TAC’s messages, including the Speed Hurts message.

The program comprises various practical and educational components including learners practicing driving to and from games,  information sessions, and the chance to each region to produce their own television commercial encouraging the public to become safer drivers.

Each TAC Cup region is assessed on their achievements in each area.

The best players from the 2013 AFL Youth Girls National Championships were recognised tonight as well.