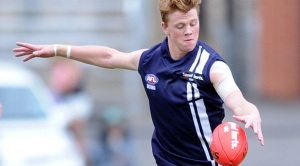 GEELONG Falcons midfielder George Cameron has found himself part of TAC Cup history after finishing in a four-way tie for the Morrish Medal, writes Brad Green.

Cameron was the sole leader on 16 votes after 11 rounds before the chasing pack eventually caught up to him in a thrilling finish.

The 180cm midfielder didn’t attend the count because of an illness but was regularly updated on his progress by text messages from his teammates and coaching staff.

Cameron said while shocked by his win, he’s honoured to receive the accolade.

“It’s a really big honour and it’s also terrific that the three others (winners) had a good season as well,” Cameron said.

“So that’s a credit to them.

“We’ve got such a good team that I thought others would chew up the votes. I knew that I had a solid start to the season and the boys kept texting me and telling me that I was a good chance (to win).

“But after round 11 I thought I was gone for all money.”

Cameron came through the junior ranks at Newtown & Chilwell and played with Geelong College in the APS.

Having been sidelined for the second half of last season after being diagnosed with stress fractures in his back, Cameron was invited back to play with the Falcons this year as a 19-year-old.

He figured in their best eight times from his 15 appearances this season and also played two VFL matches for Werribee.

Cameron said his focus while doing rehab work over the summer had been on getting his body right to be able to string together consecutive games – something he hadn’t been able to do for the past three seasons.

“The most amount of games that I’d played in row was about four or five I think,” Cameron said.

"So I just wanted to get the body right over pre-season and done all the rehab and that’s allowed me to play as many games as I have.”

Falcons coach Andy Allthorpe is delighted to see Cameron get rewarded in the league’s awards.

“He tackles well and he wins the contested ball, so he does the hard things well,” Allthorpe said.

“Once he gets on the outside he’s super clean and makes really good decisions so I’m not surprised his work hasn’t gone unnoticed.”

On a successful night, the Falcons also had four players named in the TAC Cup Team of the Year – equalling their feat of the competition’s inaugural season of 1992.

Fraser Fort was chosen at full back, Darcy Gardiner was named at centre half-back, top 10 draft prospect Lewis Taylor earned a spot on the half-forward flank with co-captain James Tsitas one of six interchange players.

The Falcons will take on the Eastern Ranges in this Saturday’s Preliminary Final at Carlton’s Visy Park for a spot in the Grand Final.

The Ranges won their Semi-Final against the Northern Knights by 19 points.

In their only meeting this season, the Ranges humiliated the Falcons by 18 goals down at Geelong, holding them to their lowest ever score of 2.9 (21).

“It’s going to be a great challenge for us and we’ll back whatever 22 we put out on the ground,” Allthorpe said.

The match starts at 2pm.