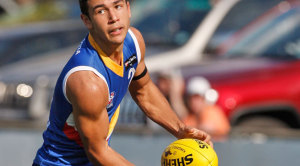 BEN Cavarra’s season went from outstanding to remarkable on Sunday night when he finished in a four-way tie for the Morrish Medal, writes David O'Neill

And the Eastern Ranges dynamo isn’t finished just yet.

The Ranges take on competition powerhouse Geelong Falcons in Saturday’s preliminary final, desperate to advance to the premiership decider a week later.

Cavarra, who has seen it all in his time at the Ranges, said there was genuine belief in the group.

The hard-nosed midfielder was a runaway best-and fairest winner with the Region last year but rarely enjoyed the taste of victory.

The Ranges saluted in just three games in 2012 but have transformed into a formidable outfit this year.

Twelve wins from 17 games saw Cavarra’s side finish second on the ladder at the end of the home-and-season and in position to challenge for the flag.

A disappointing qualifying final loss to the Dandenong Stingrays proved a setback but the Ranges returned to form quickly last week with a 19-point victory over the Northern Knights.

“We’ve got a lot of belief in our group that we can go all the way but we’ve got a big challenge against the Geelong Falcons this week,” Cavarra said.

“They’ve proved to be the premier team in the competition this year but we’re confident we can match it with them.”

The 17-year-old from Ferntree Gully is well qualified to discuss his side’s chances despite enjoying his first foray into TAC Cup finals. He was born to play in September.

Brimming with courage and a combative attitude, you’re almost certain to find Cavarra at the bottom of the pack this weekend.

There is little wonder the umpires votes drifted his way this season, including three in the final round to catch the joint leaders with a late lunge.

The Ranges were overpowered by the Calder Cannons in one of their worst performances of the year that day but Cavarra shone with 28 disposals and four tackles.

Despite acknowledging he had taken his game to a new level this season, Cavarra said it was still a real shock to be a Morrish Medal winner.

“My goal this year was to play for Vic Metro and I was able to achieve that,” he said.

“But I wasn’t expecting this. “It’s a huge honour to be named alongside the other boys because their all super players.”

The Ranges and Falcons blockbuster gets under way at 2.00pm at Visy Park, while the Calder Cannons and Dandenong Stingrays meet in the other prelim at 11.15pm.