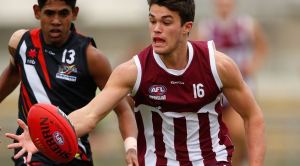 This Sunday AFL Victoria’s TAC Cup competition welcomes Queensland and Northern Territory, who will compete in the lead up to the NAB AFL U18 Championships later this year.

The interstate sides have featured in TAC Cup in previous years, but 2014 marks a new era due to changes to the Under 18 Championship scheduling.

This enables the interstate sides to play more games and further enhance their development.

Northern Territory, coached by Xavier Clarke, will take on the Western Jets this Sunday at Highgate Recreation Reserve (changed from the original fixture of being at Burbank Oval).

Queensland also plays on Sunday, against the Oakleigh Chargers at the North Port Oval.

Coach of the Queensland team, Adrian Fletcher, is looking forward to the challenge and testing his team against quality opposition.

The Queensland squad has been selected from the Brisbane Lions and Gold Coast Academy groups and has been training hard for the last four months.

“We only get the kids for two hours a week so we try and squeeze in as much as we can to make sure they have a great opportunity and get fast tracked in their roles.

“Hopefully when we put the structure in place and go down and play the TAC Cup teams we can match the Victorians” Fletcher told the AFL Queensland website.

A former AFL player himself with 231 games experience, Fletcher knows what it takes to get to the highest level and has worked on putting a comprehensive professional program in place to give each Queensland player the best possible chance to develop.

“It’s a big step up for the guys, but we think our boys are starting to realise what AFL footy is all about and what footy is like at the next level up.”

Fletcher has five key criteria for any team that he coaches: defensive acts, kicking efficiency, decision making, playing your role and having clean hands.

Both interstate teams will come out firing this weekend as they relish their opportunity to play in the best U18 football competition in Australia, the TAC Cup.