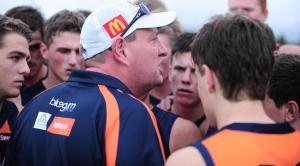 The Calder Cannons jumped to the minor premiership in the final round, and will play North Ballarat Rebels in the first Qualifying Final this Saturday at Visy Park.

After playing the bridesmaid in second spot for 11 weeks leading up to Round 18, the Cannons firstly defeated Northern Knights then had their finals opponents North Ballarat defeat the Chargers to gift them the minor premiership.

It was the position Calder started the season in after Round 1, and where they finished heading into the 2014 finals series; the sixth time the Cannons have claimed the minor premiers, the most of any TAC Cup club.

Calder Cannons have the unique record of having defeated each of the fellow top eight teams this year, and are currently on a four game winning streak leading into week one of the finals.

Four rounds into the season a top four finish, or for that matter a finals position, was the furthest thing from the minds of the Rebels as they failed to find a win to open the season.

This changed in Round 6 when they headed to Warrawee Park and inflicted the first defeat of the season on the Chargers. It kick started an eight game winning streak which propelled the Rebels from twelfth to fourth on the ladder.

Despite losing three of their last five games, the Rebels were able to defeat the Chargers for a second time for the season in the last round, and had results go their way with fellow country side Gippsland Power providing them the biggest helping hand by defeating Western Jets in the final round.

The twin pairing of Peter Wright and TAC Cup leading goal kicker Jayden Foster last week combined for 10 goals up forward to match the Northern Knights goals total in Round 18. Wright is running into some ominous form, averaging eight marks a game since his return to the side from the NAB AFL U18 Championships, unstoppable in the air the last two rounds with 10 and 14 marks against North Ballarat Rebels and Northern Knights respectively.

While Wright was away on Championship duties, Foster made the forward line his own, averaging four goals a game which helped send him to the top of the goal kicking ladder. There he stayed right till the end of the home and away round to clinch the goal kicking title with six majors last week.

In stark contrast North Ballarat is not a high scoring side, having only kicked more than 11 goals on one occasion this season. Defence is the key for the Rebels, with their ability to limit the supply for their opponents. Oscar McDonald has played a key role in the backline this season for the Rebels, and will have a big task ahead of him this weekend.

One of the key match ups for the game will be Mark Kovacevic versus Rowan Marshall in the ruck, with both attempting to give their respective midfields of Matt Goodyear, Nick O’Kearney, Tanner Nilsson (Cannons) and Sam Bennett, Tom Ludeman, Joel Cowan (Rebels) first use of the ball.

For the winner, a Preliminary Final berth is on offer, with the loser to face Sandringham Dragons or Murray Bushrangers in the Semi Finals.