Farewell to a TAC Cup Pioneer 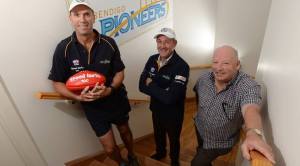 It is the end of an era in the TAC Cup with the longest serving AFL Victoria Talent Manager Ray Byrne retiring.

After countless TAC Cup matches, training sessions and meetings stretching over nearly a quarter of a century, Byrne is stepping away from football.

It will be a whole new world for Byrne who has known nothing but football, playing 219 VFL/AFL games for Carlton, Collingwood and Geelong over a 12 year career before he before stepping into football development.

It was back in the early 90’s when Byrne was working as a development manager in Gippsland that a TAC Cup team for the region was mooted. Byrne along with fellow development manager Roger Geron began the mammoth task of starting the club from scratch.

“The starting of the TAC Cup was really important for football in Victoria. We, along with a few others, sold the project at different meetings right across Gippsland," Byrne said.

“Selling the program was tough as it was not accepted.”

The initial resistance came from clubs not wanting to lose their best players and not being able to grasp the long term TAC Cup vision, but eventually with the hard work from Byrne and his team that changed.

“Once the competition got up and running they could see what we were actually talking about and how it was not going to negatively affect their clubs.”

Power entered the competition in 1993. It’s hard to believe looking at the Power’s facilities now that in those early days the club office was actually based in a room under Byrne’s house behind the garage!

When the opportunity for Byrne to return home to Bendigo to take the helm of the Pioneers arose at the end of 2000, the timing was right for a change.

Francis transitioned from Coach to Talent Manager and is forever grateful to Byrne for giving him his initial opportunity in the TAC Cup.

“He was great to work for, a very funny guy and a great support,” Francis said.

Byrne’s sense of humour has endeared him to many along his football journey.

Described as easy to work with by former staff members, Byrne knew how to make things happen, be it the establishment of a new club or enhancing the infrastructure of an existing club.

He always had the best interests of the kids in the program at heart.

The friendships he has made along the way and being able to work with some wonderful people are some of the things that Byrne has appreciated the most about his role.

“Working with all of the people at AFL Victoria over the years there have been terrific people within the organisation, from Ken Gannon to David Code, Peter Schwab and Tony Frawley and then to the current crew like John Hook and Leon Harris,” Byrne said.

While working in the TAC Cup Byrne has seen an amazing array of talented players come through the Power and Pioneers programs, but for Byrne it’s not all about the players that get drafted and go on to have AFL careers.

“One of my favourite players that never played league footy is Simon Rosa.

“It is just a big a thrill to see players go back and play local football, winning best and fairests, premierships and many now moving into coaching.”

“Over the years there have been some real superstars come through the program.”

After seeing so much change and so many advances during his time working in the TAC Cup, Byrne thinks the future look bright for the competition.

“There are good people running the clubs, there a good people in at AFL Victoria, I think the competition will only get better.

“The AFL clubs are more involved than they ever have been before which will be good for the competition.”

As for Byrne’s future, he isn’t looking too far ahead, his plans are simple.

“At this stage, taking it easy and putting the feet up. I am just glad to get my weekends back!”

The TAC Cup community thanks you Ray, and wishes you all the best in your retirement.