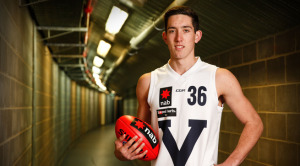 Dandenong Stingray Jacob Weitering is being strongly touted as one of the top prospects at this year’s NAB AFL Draft, but what is it about the 17-year-old that makes him stand out?

The versatile 195cm key defender has taken all before him this year, starring for the AFL Academy in two matches against Peter Jackson VFL teams in early April, before leading Vic Country in its undefeated U18 Championships campaign.

Vic Country High Performance Manager Leon Harris said Weitering’s ability to impact contests and take marks in defence was a huge strength on the field, but that his off-field character was equally impressive.

“If he goes at pick No.1, there certainly won’t be any arguments from me,” Harris said.

“He’s a very mature person and player, and I just think he ticks most of the boxes.

“When he’s been at AFL clubs during his time with the AFL Academy, he’s been first class and there have been rave reviews about him as a person.”

Late last month, Weitering was awarded the Ben Mitchell Medal for best representing the values important to the AFL Academy program and, according to Harris, his speech at the presentation function “oozed class”.

Weitering’s mature character saw him named the sole captain of Vic Country, even among a group of strong leaders that had progressed through the AFL Victoria Country Academy program alongside him.

“There were a few of them on the radar for the role, but it was more that he (Weitering) grabbed the group by the scruff of the neck,” Harris said.

“We thought there’d be a group of them, but after the first game of the Championships, it was pretty clear-cut that he was the man for the job.”

Weitering himself said his leadership skills had been a work in progress.

“I considered myself a bit of a quiet leader to start off with around U15 or U16 level, but coming through the AFL Academy program and then into Vic Country U18s has certainly helped me with my confidence, leadership skills and organisation,” he said.

Weitering said he was “pretty happy” with his captaincy during the Championships, adding that the key to leading the team was accounting for the variety of personalities within the side.

“(For example,) you’ve got (Geelong Falcons midfielders) Rhys Mathieson and Darcy Parish, who get quite fired up on game day, and then myself and (Dandenong teammate) Kieran Collins stay a little bit quieter,” Weitering said.

“So you’ve just got to recognise that and as long as the team gets along off-field, then I’m sure the chemistry comes on-field.”

On the field is certainly somewhere Weitering does his finest work.

He demonstrated an ability to play as a marking forward in Dandenong’s run to a TAC Cup preliminary final last year, but patrolling the back half is where Weitering is building his reputation in 2015.

While he lined up on and arguably beat AFL-listed forwards Majak Daw and Matthew Watson in the AFL Academy’s clashes with Werribee and the Northern Blues, Weitering said there are still parts of his game he needs to work on.

“I’m definitely still working on the defensive aspects of my game,” he said.

“I’m a key-position defender but I didn’t always play there – I was actually a bit of a ball-winner when I was younger and I’ve only been playing down back since Paul Henriksen (Vic Country coach) put me there in the U16 nationals.”

A rapid growth spurt was behind Weitering’s shift to defence and he’s hoping there’s still more to come.

Read the full feature article in the AFL Victoria Record this weekend.