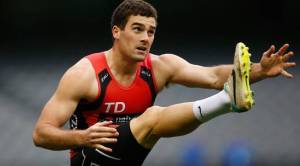 A number of TAC Cup players impressed in the early tests of the 2015 NAB AFL Combine.

Friday night was the one and only time during the Combine that the footballs were in action, with the clean hands, goalkicking and kicking tests.

Dandenong Stingrays defender Kieran Collins (pictured) missed a perfect score by one in the clean hands, leading the way with 29 ahead of Northern Knights pair Darcy MacPherson and Tyrone Leonardis with 28.

Players from the Knights featured in the top 5 of all three tests, with captain Jade Gresham one of four players to score a perfect 30 on the goalkicking, along with Calder Cannon Nick O’Kearney, Morrish Medal winning Murray Bushranger Clayton Oliver and South Australian Oleg Markov

The Day 3 Combine results were still being finalised on Saturday night, but the following were the best from the TAC Cup:

Follow @TACCup on twitter for the 3km results on Sunday, as well as the State Combine results.