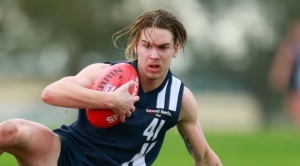 The 2016 Falcons squad may not boast as many high-profile names as last year's group, but still looks to be very even across the board.

Despite playing in three draws in 2015, the Falcons secured a top-four spot by defeating the second-placed Dandenong Stingrays in the final home-and-away round. However, they couldn’t fire in September, losing a heartbreaker to the North Ballarat Rebels by 12 points in a qualifying final and suffering a 54-point defeat to the Eastern Ranges the next week.

Geelong boasted a team of considerable top-end talent last year, producing four top-40 AFL Draft picks. However, Talent Manager Michael Turner said the club’s list was different in 2016. “I think this year we’ve got more of an even group,” Turner said. “We’re probably not as high-profile as we were last year but I still think we’ve got some good developing players who’ll get themselves drafted.”

One player already in the draft frame is Alex Witherden. Turner said the attacking defender who starred in the AFL All Stars match on Grand Final day is a “real leader of the club and very professional in everything he does”. Turner predicted Witherden was “a very strong prospect of getting drafted and probably pretty early”.

The Falcons have invited several players who struggled with injury in 2015 back to the club as over-age players, including: Max Augerinos, who only returned from a knee reconstruction in June; Lockey McCartney, the son of former Western Bulldogs coach Brendan McCartney; and Brett Blair, who kicked 34 goals in 13 games last year. Joel Bennett and Ben McCarthy will be Geelong’s other 19-year-olds in 2016.

A couple of club graduates have also returned as development coaches, including 2006 captain Daniel O’Keefe and AFL superstar Patrick Dangerfield, who contacted Turner about expanding his knowledge of the elite talent pathway after being traded to the Geelong Cats. “He really enjoyed his time at the Falcons and wanted to learn a bit more about AFL game development,” Turner said. “He comes down once a week when his schedule allows it. That’s not a bad get, is it?”

The Falcons open their season on Saturday March 26 against the North Ballarat Rebels at Simonds Stadium.