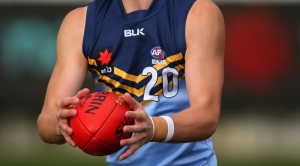 NSW/ACT Rams coach Tadhg Kennelly was rapt with the side’s 19-point victory over Vic Country last weekend, but is well aware the Calder Cannons will be a “different challenge” this week, as Daniel Short reports.

The Rams played with dare and aggression, much like their coach and former Swans star.

One player catching the eye already is inside midfielder Charlie Bance. After an interrupted preseason, Bance was best afield last weekend and is an emerging talent.

“The first game coming together ... a lot initially was trying to get them to jell.” Kennelly said.

“From a gameplan point of view we’re very aggressive with our ball use coming through the middle  and taking the game on. That’s the way I played my football and that’s what you’re trying to instil in some of the kids.

“He (Bance) really took a total break during the preseason; he took about three months off and did a lot of upper-body conditioning and core work.

“(He’s) very strong inside, an Ollie Wines type of footballer – if he gets to that level it’ll be quite impressive.”

Cannons coach Andrew Johnston said his sides focus would be on the process rather than the result. While its 0-2 start to the season has been disappointing, he felt the win-loss ratio was a true reflection of the team’s performance.

Despite the defeats, one positive has been the form of Brad Bernacki, who has impressed the coaching staff and been the clubs best performer thus far.

“The wins will look after itself, at the end of the day we’ve got to make quite a few changes this week due to private school boys.” Johnston said.

“If they play to the way we want them to play the result will look after itself. But if we’re 0-3 and blokes play their role then so be it.

“In patches (we’re playing well), but a lot of what we’ve asked them to put in place they haven’t.

“Over the first eight quarters, we’ve probably played maybe two quarters (of good football). You can’t expect to be competitive on the scoreboard if you don’t do what you’re asked to do.”