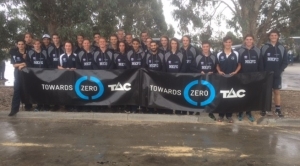 The Northern Knights would have been mentally sharp going into their Round 4 clash with the Geelong Falcons after the players drove from northern metropolitan Melbourne to the game at Simonds Stadium in Geelong.

They stopped just over halfway at a designated meeting point (BP Service Station, Little River) for a break before having the opportunity to swap drivers and continue down the Princes highway.

The drive was undertaken as part of the Transport Accident Commission’s (TAC) ‘Driving to an Away Game’ activity.

“We care about the safety and wellbeing of our squad members and are committed to conveying the TAC’s ‘Towards Zero’ message to our players,” Kennedy said.

For more information on the TAC’s ‘Towards Zero’ campaign, head to www.towardszero.vic.gov.au.