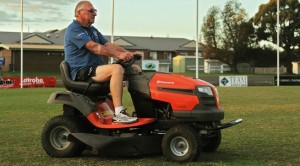 Gippsland Power welcomed the return of Western Bulldogs captain Bob Murphy to help recognise the contribution to the club of Roger Knowles.

Knowles has been integral to the development of Gippsland’s Centre of Excellence, looking after the facility virtually on a fulltime basis. He now fulfils the role of property manager, and is always the first to help out if the need arises and he relishes his work with the Club.

The 25 year partnership with the Transport Accident Commission takes on a new mantra in 2016 as the clubs commit to stand together towards zero deaths and serious injuries on the roads.

TAC CEO Joe Calafiore said the return of role models like Murphy reinforced how TAC Cup players have the opportunity to show leadership on and off the field.

“We know that young Victorians are among the most likely to be hurt on our roads and that’s why our partnership with AFL Victoria and the TAC Cup clubs is so valuable -  it enables us to reach out directly to young people and empower them to become positive role models,” Mr Calafiore said.