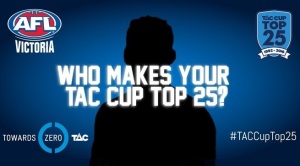 Who will be revealed as the no.1 player from the TAC Cup over the competition's 25 year history?

All will be revealed at the Morrish Medal night on September 4 when the top 25 players from the storied history of AFL Victoria’s premier U18 competition are announced.

2016 marks the 25th year of the TAC Cup and AFL Victoria’s long-standing, ongoing partnership with the Transport Accident Commission (TAC), and to celebrate the success of the TAC Cup since its inception in 1992, we’re recognising the remarkable talent to have emerged from the competition over the past 25 years.

A selection panel consisting of those who have had a long and distinguished involvement in the TAC Cup and Victorian Talent Pathway including Kevin Sheehan, Leon Harris and Anton Grbac have had the unenviable task of narrowing down the long list of incredible TAC Cup talent to a top 25 players.

Over 1,000 players have been drafted from the TAC Cup over its history, with many more following a variety of different pathways to footballs elite level post TAC Cup, like the Peter Jackson VFL.

The next month will see us look back at a who's who of AFL stars that found their start in the Victorian talent pathway, acknowledging the depth of talented players helped in their development by our regions and their staff.

The list of contenders has been selected from a group that have each played at least one game in the TAC Cup and have over 150 games of AFL experience, featuring Brownlow Medallists, Coleman Medal winners, AFL club captains, best and fairest winners, All Australian selections and premiership players.

The look back at the history of the TAC Cup and its players highlights the important role the competition plays in developing players both on and off the field, which should never be underestimated. Creating safe road users is a key message our valued partner TAC has instilled in our players since 1992, and continues in 2016 with the Towards Zero messaging.

We look forward to celebrating the role the TAC Cup has played in developing a long list of AFL stars that we have enjoyed watching over the last two decades.

The top 25 players will be released the week of August 22, with the final order of the top 25 announced Morrish Medal night.

Who will make the final 25?

Join the conversation via #TACCupTop25 across our social media channels over the next month to have your say.