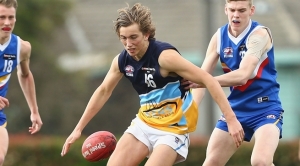 Consistency of performance is a trait many under-age footballers sometimes struggle to find, but Bendigo Pioneers midfielder Kobe Mutch had no such problems in 2016.

The 187cm Gol Gol, NSW product is a member of the GWS Academy and represented the AFL Academy in exhibition games, Bendigo in the TAC Cup and NSW/ACT Rams and Allies representative teams at various times during the year, but rarely dropped his level of hard-nosed play.

Mutch averaged 34 disposals and seven marks per game in four TAC Cup home-and-away matches and also earned selection on the interchange in the U18 All Australian team after averaging 22 disposals per game in four matches for the Allies in Division 1 of the NAB AFL U18 Championships.

“I think my knowledge on footy is pretty high. I try to back my instinct in footy knowledge and show that I know a lot about the game.”

“The scrutiny around AFL is pretty high. Going into an AFL environment where you’re always scrutinised about every single thing you do, that’d be pretty tough I reckon.”

“I don’t model my game on anyone, but I like watching the best midfielders of every team and learning different parts of their game. I watch (Sydney’s) Dan Hannebery a fair bit – I like his work rate and his gut-run.”

“I was pretty happy with my season; I thought it was pretty consistent. Unfortunately as a team – for the Allies and Bendigo Pioneers – we didn’t get the success that we would have liked.”

Describe what it was like playing for the Allies against some of your Bendigo teammates who were representing Vic Country in Division 1 of the U18 Championships.

“Playing against Joe Atley, Cooper Jones and Braidon Blake was different, because you train with them all throughout the year and do a pre-season with them, but once you’re out there I guess you’re just focused on winning the footy and winning the game. Me and Cooper had a bit of banter, but not too much.”

Describe your experience as part of the GWS Academy so far.

“I was lucky enough in the (2016) pre-season to spend two weeks there (at GWS) and train in their facilities with the AFL players and get a lot of knowledge out of their coaches and assistant coaches. Also, I was lucky enough to spend a week there during the year seeing how they prepared for a game against Collingwood.”

“When I played for NSW/ACT in the Division 2 U18 Championships against Queensland, we won the game and I thought I had a pretty big impact (32 disposals, six inside-50s, four clearances, four tackles).”

- Joseph Atley: “He’s a warrior. His contested footy is first-class and he’s pretty clean below his knees. He’s pretty competitive around the footy and I think he’ll make a good AFL player.”

“I honestly don’t know. Maybe getting into a real-estate course, but I’m just focused on footy at the moment.”

“I think it’s hard to go past (North Ballarat’s) Hugh McCluggage. He’s probably the stand-out and he’s had a very good year.”