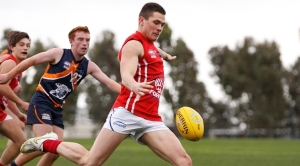 It wasn’t going to be easy for Ben Ainsworth to back up his stellar 2015 season as a bottom-ager with the Gippsland Power and Vic Country, and his 2016 season has indeed presented hurdles.

Last year, the 179cm Morwell product was named in the U18 All Australian team after playing a key role in Country’s undefeated NAB AFL U18 Championships campaign, while also jointly-winning Gippsland’s best-and-fairest award and earning selection in the TAC Cup Team of the Year as a dynamic forward.

This year, Ainsworth had to overcome early-season wrist and knee injuries and a mid-season suspension to kick 18 goals and average 22 disposals per game in nine TAC Cup matches playing more as a midfielder. He also booted six goals in three games for Vic Country at the U18 Championships and graduated to senior VFL level to play one game for the Casey Scorpions (kicking two goals from nine disposals).

Ainsworth spoke at the recent NAB AFL Draft Combine, where he recorded the second-best time in the 20m sprint and finished in the top 10 of the agility test, repeat sprint test and running vertical jump (right foot).

“There’s a combination of a few I think. I love the way (Hawthorn’s) Cyril Rioli plays in terms of his defensive efforts, as well as his overhead marking and his ability to score a goal out of nowhere. (Also, GWS’) Devon Smith, (who has) that 50-50 balance of (playing) forward and midfield.”

“It was a pretty interrupted season early going. In the latter half of the season, it was pretty handy to string a few games together and put some form on the board. It was disappointing at the start, but I got my head around the right people and slowly gained some advice from people in the AFL Academy and Leigh Brown at Gippsland Power. They’ve been really great for my development and I’ve learnt a lot this year.”

How do you think you handled your change from being a forward to more of a midfielder this year?

“It’s that 50-50 balance – you can’t just be a one-position player at AFL level now. It’s about being almost a utility now in some sense. I tried to improve my endurance along the way. It’s a bit difficult when you’ve been injured in pre-season, but I tried every way possible to try and improve my endurance. I think I’ve done that in time and hopefully that shows in my results at the Draft Combine.”

How have you handled the scrutiny that has come with being a potential top draft pick this year?

“There was a lot of expectation going into this season. It was all pretty much smooth sailing last year with the successfulness of Vic Country and Gippsland Power. I just take it on the shoulders and play my footy.”