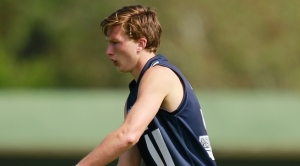 Geelong Falcons play-maker Alex Witherden is hoping a broken leg suffered in May this year hasn’t taken him off the NAB AFL Draft radar.

The 186cm St Joseph’s product suffered a broken fibula and tibia while representing Geelong College in a school football match when fellow TAC Cup draft prospect Tim Taranto of the Sandringham Dragons fell across his lower leg while laying a tackle.

Witherden, however, had already compiled an impressive set of performances for the Falcons, the NAB AFL Academy and his school team throughout 2015 and early in 2016 – including two TAC Cup matches this year in which he averaged 23 disposals and five marks per game – playing mostly as a skilful and composed defender.

taccup.com.au talked to Witherden at the recent NAB AFL Draft Combine, where he didn’t participate in physical testing having only commenced his rehabilitation running program several weeks prior.

“I see my strengths as kicking, decision-making and competitiveness.”

“I’ve been asked: ‘Do you bite your fingernails?’ ... I thought that was a bit left-field. Another club gets you to count back from 796 in sevens and spell ‘Adelaide’ backwards.”

Are you worried you haven’t had enough of a chance to show AFL clubs what you can do on the field?

“Last year I played 12 games for the Falcons and played in the AFL Academy game on Grand Final day with a few school games along the way as well, and then this year I had two Academy games, two Falcons games and a couple of school games. I’m definitely hoping that’s enough for the clubs to take a risk and invest in me.”

“I’m just looking to improve my aerobic base and that running capacity to the next level so I can go to an AFL club and cover the ground and work at the intensity required.”

“I like to model my game a little bit on (Essendon’s) Brendon Goddard, who plays that sweeping role across half back, can pinch-hit in the middle and play forward. I think that suits my game style.”

What type of player do you think you’ll end up being?

“Initially I think half back is a role that would suit me best, but after a few pre-seasons and increasing my body size, hopefully I’ll go into the midfield and even play forward. I feel comfortable playing anywhere on the ground, so I’d like to be like a swingman that can be versatile and play any role.”

“I played on (North Ballarat’s) Hugh McCluggage in a practice match this year. That was the first I’d really seen of him and he was awesome. That was a bit of an entrée for what he was going to provide for the rest of the year. I played on (Sandringham’s) Tim Taranto in a school game and he was going well before he tackled me and broke my leg. It was all incidental and he looked after me once I was injured. There’s no hard feelings.”

- Sean Darcy: “I think in this year’s draft he’s probably the best tap ruckman. He’s got really good size about him, he’s strong in the contest and I think he’s pretty smart. I think he’s got a lot of upside because he’s had a bit of injury along the way. Once he can get his body right, he’ll be a really good player.”
- Jack Henry: “He’s really athletic. He can jump, he can run, his understanding of the game’s really improved this year and he’s become a lot more competitive and driven to the cause, because he was competing at a high level of athletics before this year.”

“I’d probably just be going to uni and studying a business course, but I’m not too sure about that yet.”

“It depends on which club has it, for me. I think (North Ballarat’s) Hugh McCluggage and (Sandringham’s) Andy McGrath are both up there. I like (Gippsland’s) Ben Ainsworth as a smoky as well.”