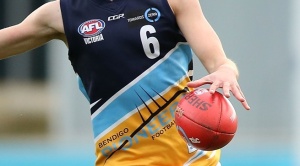 Coburn played in Bendigo’s inaugural TAC Cup match in Round 1 of the 1993 season and is the first former Pioneers player to return to coach the club. He replaces Brett Henderson, who coached Bendigo in 2015-16 and oversaw the development of AFL draftees such as Tom Cole (West Coast) in 2015 and Joseph Atley (Port Adelaide), Kobe Mutch (Essendon) and Kayle Kirby (Collingwood) in 2016.

The Nyah native used to travel almost 100 kilometres to attend Pioneers training sessions and said understanding the “tyranny of distance” faced by some of his players would be central to his new role.

“It was an exciting period when the competition first started (in 1992),” Coburn said.

“Everything was just coming together almost as a bit of a trial, really. We did a lot of our training at that stage at a place called Nullawil which was pretty much in the middle of the region – it was just a country footy ground with pretty limited resources.

“Boys were coming from left, right and centre to play a series of trial games, with training run out of our regional centres by our football development managers. In some ways, some of those structures are still in place.

“It’s come a long way in terms of the professionalism of the program and its delivery, but some of the issues we’ll face are still there – the tyranny of distance and being able to manage our boys who are sometimes spread five hours from each other.”

Coburn said he’d be a “players’ coach”, one who’ll aim to build strong relationships with players and their families to help them manage the often demanding commitments of the club’s program in terms of time and distance travelled.

But he also boasts a strong record in getting the best out of teams on the field, coaching South Bendigo to six Bendigo FNL finals series (including two Grand Finals) in seven years at the club’s helm from 2007-13.

“It was a great experience to have my own side for a long period of time,” Coburn said.

“I coached there for seven years and played for eight, and to have a long stint at a club you have to constantly reinvent yourself and the list. That probably correlates really well to the Pioneers with new players coming through each year.

“Being able to constantly meet people, develop them and relate to them was a strength of mine at South Bendigo and through all my days in primary-school teaching as well. My three and a half years as Regional Development Manager for AFL Central Victoria (before being appointed Pioneers head coach) probably also added an extra dimension with establishing the AFL Central Victoria Academy (for the region’s talented 11 to 15-year-olds) from scratch.”

Coburn’s work on building the Academy with the help of many in the community means he has a strong knowledge of the region’s football landscape.

The challenge now – as it always has been – is to mould players from across that region into a team Coburn hopes will produce “an exciting brand of football where players have every opportunity to show what they can do”.