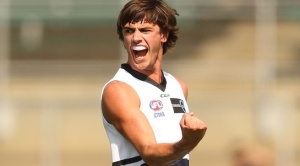 The Northern Knights have endured three particularly dark years, but the club looks to be emerging into the light.

Northern was dominant in the early days of the TAC Cup. The Knights won four consecutive premierships from 1993-96 but haven’t reached a Grand Final since, and Talent Manager Rhy Gieschen said earlier this year it was time for a change.

“We want to bring the Knights back to being one of the stronger TAC Cup regions,” Gieschen said. “Going through a pretty poor year last year has probably really galvanised the playing group and they want to have some more on-field success.

“About midway through last year we made a real effort to put time and effort into some of our bottom-age players – they played every game when they were available for us and in key roles. We think that will hold us in pretty good stead this year.”

That effort to blood bottom-age players in 2016 is bearing fruit now.

2017 captain Nick Coffield played every game last year and the rebounding defender became the match-winning forward in Northern’s 16-point victory over the Western Jets in Round 1, booting four second-half goals to go with his 22 disposals.

In the same game, Marcus Lentini (13 games in 2016) had a match-high 31 disposals, while Alex Federico (eight games) was influential in the contests with 22 disposals and seven clearances and Patrick Naish (nine games - pictured) dynamic inside 50 with two goals.

Last week against the Eastern Ranges, Joel Naylor (nine games in 2016) was the hero of Northern’s 15-point victory with six goals. Ethan Penrith (17 games) had a round-high 13 tackles and Jack Petruccelle – who burst onto the scene in two games late in 2016 – had 19 disposals and six inside-50s.

Gieschen’s investment in the future late last year may yet take the club back to the glories of its past.

Round 3 keys to victory:

16: The Dandenong Stingrays proved the benefit of accurate kicking for goal in their 20-point triumph over the GWV Rebels, getting the win despite having the same number of shots on goal (16.6 to 12.10). Rosebud product Jai Nanscawen (4.1) and Crib Point junior Bailey Williams (three goals straight) were Dandy’s chief dead-eyes.