Have you sworn your Blood Oath? 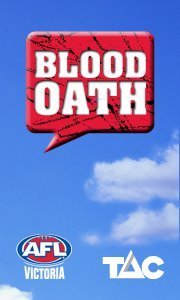 In the last week, the Blood Oath campaign has kicked off across Victoria. The Blood Oath campaign is a joint project between the TAC and AFL Victoria to prevent young people, particularly males aged 18-25, from being killed or seriously injured in road trauma. Fronting the campaign is two of the AFL’s best known brothers, Brad and Chris Scott, who can both be seen in the ad campaign now airing on TV.

The TAC recognises the importance of young people, particularly young footballers, being road safety ambassadors in their community and this campaign promotes that. When we pick up the papers of a weekend, we want to be reading about the positive stories to come out of football, not of horrific road accidents and the damning stats that last year alone we lost the equivalent of 10 country footy teams’ worth of men due to road trauma (220 male deaths in 2010).

Since the Facebook site has been set up, over 12,000 people have shown their support for the site by ‘liking’ it, but we need you to take the next step of pledging your ‘Blood Oath’ – which over 3,000 people have already done. By taking the Oath, you are showing your commitment to your teammates, your club and the wider community to ensure that you understand that when on the road, “your mate’s life is in your hands”.

Stats for 2011 show we have already lost about three AFL footy teams worth of men on the roads, so now is the chance for football followers to put at a stop to this trauma and encourage young people to drive responsibly by taking the “Blood Oath”.

Apart from publicly declaring to do your bit to curb the road toll for young drivers, individuals and clubs also have the chance to win great prizes, but only by pledging your Oath (those that simply ‘like’ the facebook site will not be part of the prize draw for their club).

While VFL clubs like Werribee Tigers and Geelong have shown the way early – featuring in the top 10 - the challenge is now on the TAC Cup clubs to lift their pledges and start challenging for the $30,000 by getting their players and supporters on board.

Each week during July we will update you with the biggest ladder movers, and prize winners from the TAC Cup.

During July the TAC will be on the road at local matches as well, so keep an eye out for them at your local game.

So now is the time to take your “Blood Oath” for your TAC Cup team.

The aim is for your club to have the most oaths of all entries.

Prizes for clubs with the most oaths, in country and metropolitan Melbourne will be awarded each week. Individual prizes are also up for grabs.

At the end of July, one club in country Victoria and one club in the metropolitan area will each be rewarded with a $30,000 prize. Winning clubs will be those who receive the most pledges.