Dragons and Knights Play Out Draw 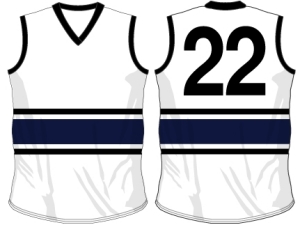 The Sandringham Dragons 11.14 (80) came from behind to salvage a thrilling draw with the Northern Knights 12.8 (80) in Preston on Saturday, as Adem Saricaoglu reports.

The Dragons overcame a 23-point deficit early in the last quarter and scored four goals in the last five minutes to pull off the remarkable comeback.

The Knights fielded their strongest team of the season, which included the return of gun mobile ruckman Billy Longer from Vic Metro duties.

Three goals in a row had them up by 28 points half way through the second quarter which left the Dragons reeling.

Clever ball use and an outstanding effort from their back line helped maintain Northern’s lead for most of the game while Sandringham dominated possession and time in their forward half, but the margin remained beyond four goals at the main break.

“I felt that the way we attacked the footy down back was a whole lot better today,” Northern coach Anthony Allen said about the effort of his back line after the game.

Poor kicking restricted Sandringham’s impact on the scoreboard, only posting 2.8 at half time.

“We missed too many opportunities that kids of this calibre should be kicking,” Groves said after the game.

Seven goals were scored in what was a goal-for-goal third term as the game began to open up.

Goals were answered with goals directly from centre bounces as the floodgates opened.

Longer’s long-range effort from 50 seemed to ice the game close to three-quarter time, but Dragon Lachlan Boyd replied a minute later to reduce the margin to 19 at the final change.

Wasted opportunities early in the last quarter cost both sides crucial momentum, but when speedster Anthony Anastasio finished a coast-to-coast effort with a breakthrough goal, it was game on.

Sandringham took hold of the game in the middle and choked the Knights when they tried to rebound, but when Northern finally broke through they took advantage of the open space in their forward line and goaled through Luke Celebicanin and Totevski to seemingly seal the game.

Dragon playmaker Kenny Ong took the game on inside forward 50, kicking Sandringham’s third in a row before marking in the goal square in the last minute.

He slotted through his shot to level the game and set up a massive centre bounce.

Northern won the clearance and fed the ball to Josh Totino, who was forced wide when he had a shot would have won the game if it scored.

However the ball landed on the full seconds before the final siren.

Northern coach Anthony Allen said he was pleased with the first three quarters and praised the efforts of his back line.

“For three quarters it was a really solid effort by our guys and Sandringham just ran over the top of us in the last quarter, and we were pretty lucky to hold on in the end,” he said.

“Obviously (I’m) a bit disappointed that we weren’t stronger in the last quarter when we were probably going to the scoring end.”

Groves said it was a change in attitude that turned the game around for the Dragons.

“Limiting their effectiveness around the stoppages, they were really good around there with Billy Longer and that, so just to come back and go head to head with them was pretty good,” Groves said.

“You’re never really happy with a draw but it was an interesting feeling for a lot of the boys who have never really played in a draw.

“We probably got of jail a little bit.”