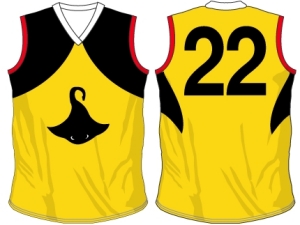 The Dandenong Southern Stingrays finally hit the goals with a 45 point win over the Oakleigh Chargers at Wallawee Park, Oakleigh in the round 13 TAC Cup last Saturday.

In superb conditions, the game started with all one way traffic as the Stingrays completely dominated the first term. 5 goals, two points from 22 inside 50’s to the Stingrays whilst the Chargers were kept scoreless and they only managed two inside 50’s. First term goals were spread across five individual players, two great crumbing goals to Nick Tuddenham and Todd Elton whilst singles to Brett O’Hanlon, Nick Haynes and Piva Wright were the finishers to some fine mid field work by the Stingrays.

The second term saw the Chargers rally on the back of a restructure of their mids and forwardline and an old fashioned chat from the Chargers coach, Greg Doyle. The Chargers still found it hard to kick goals as the Stingrays defence led by Matt Buntine, Robert Hill, Damien Johnston and Corey Buchan were making it near impossible to penetrate the inside 50. Piva Wright was exposing Oakleigh in the forward line and kicked his second for the game after a very strong contested mark in the goal square and Nick Haynes kicked truly from a passage play which saw the ball travel coast to coast. The quarter saw Oakleigh score 2 goals 5 points, whilst the Stingrays kicked 2 goals 2 points to hold a 29 point lead at half time.

The third quarter was more to and fro between the two teams with neither team able to control the game for long periods. 3 goals one point to the Stingrays to the Chargers four straight goals showed the evenness of the two sides. Jason Salopek and Nick Tuddenham were superb under duress on a wing, second game player Darren Minchington, Lachie Whitefield and Lachlan Wallace racked up a heap of possessions in the mid field. Todd Elton and Jake Calvert adapted to the wet and slippery centre to be competitive in the ruck and giving midfielders first use. A highlight for the quarter was the intensity and work-rate the forwards were showing to keep the ball inside 50 and creating scoring opportunities. Stingrays coach Graeme Yeats was happy with his chargers but wanted them to finish the last quarter off. His main message was to stick the tackles and lift the intensity, as they did in the first and not to overuse the ball through the middle.

The last quarter was a scrappy start with Oakleigh kicking their first and only goal for the quarter at the 9 minute mark which was quickly answered by a strong contested mark to O’Hanlon who kicked truly from 50. The next 20 minutes saw the Stingrays dominate the game again with majors to Alex Benbow who snapped truly from an inside 50 stoppage, Piva Wright who finished off some strong work from Jake Calvert for his third and Brett O’Hanlon marked and kicked truly for his third. The only sore note for the day is a hand fracture to Jordan Kelly who will miss the next 4 weeks.

After the game Yeats said “Collectively our ability to work between the arc’s and hit them on the scoreboard was a highlight today. Our forwards and midfield combined well, whilst the backline were superb and were near faultless today.

“Overall as a club we are very happy with today’s outcome, to get a win at Warrawee Park against Oakleigh is a good outcome as they are a quality team and hard to beat at home.”

This week is a bye for the TAC Cup, but 7 Stingrays players will represent Hallam’s Secondary College on Sunday 10.50am at the MCG where they take on Essendon Keilor Grammar school for the School Sports Victoria Grand Final for the senior boys’ competition. The game is played prior to the Melbourne versus Hawthorn game.