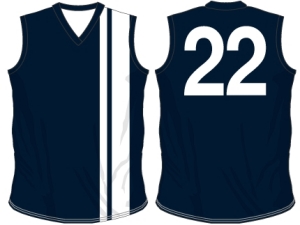 The rookie-list small forward played his best match for the Bulldogs against Essendon last Saturday night in Melbourne at Etihad Stadium with 19 disposals and kicking two goals.

Luke has played nine consecutive AFL games since making his debut in the Round 12 clash against St Kilda, averaging 13.9 disposals and 4.2 tackles. He gained his selection for the Bulldogs after impressive form for WIlliamstown in the Peter Jackson VFL early in the season.

Western Bulldogs’ coach Rodney Eade said the livewire forward has been a revelation since making his debut earlier this season.

“Luke has added a lot of life, enthusiasm and talent to our side — it’s a just reward for the high quality performances he has put in over the past nine games, ” said Mr. Eade.

Recruited from the Geelong Falcons, the Western Bulldogs selected Luke with pick number 22 in the 2011 AFL Rookie Draft.

Luke played in the 2010 TAC Cup and was named the leading tackler in the competition. He also boasts superb speed and broke the record for agility at a state screening last year. His junior football club is the Leopold Lions.