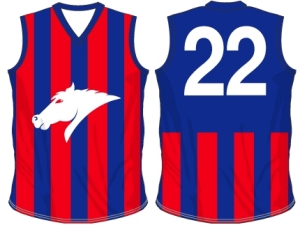 The Falcons managed just six goals for the game in perfect conditions as both clubs effectively swapped positions in the lower half of the top eight before next week’s elimination finals.

Oakleigh had six multiple goal-kickers, combining for 21 majors on the day.

The Chargers went into the game needing a win to guarantee a finals berth and keep the ninth-placed Northern Knights out of reach.

The Falcons went into the game in sixth place with a remote chance of sneaking into the top four, albeit needing a percentage boost of at least six per cent.

The game began openly with goals at both ends, however by the 20-minute-mark; the Chargers blew the margin out to 25 points.

Oakleigh continued to bombard Geelong’s defence into the second term and it didn’t take long for them to build their lead.

A clever banana goal from Gotch was followed by goals to Murphy and Tomlinson as the margin ballooned to 28 points before the half-way mark of the second quarter.

However the Falcons slowly worked their way into the contest, and Taylor Adams finally capitalised on the scoreboard.

Play came to a halt half way through the quarter as Chargers ruckman Dylan Heath had to be stretchered off after receiving a heavy knock.

When play resumed, Geelong couldn’t replicate the momentum they were gathering.

After Hammond kicked his third goal of the quarter, the game was over.

A snapped goal from Damien Mascitti had Oakleigh’s score hit the 100 mark eight minutes in and by three-quarter time another six goals were added, with the margin sitting on 97 points.

Remarkably, the Chargers were kicking to the scoring end (Legends Stand) in the last quarter and it only took a minute to blow the margin out beyond 100.

The win boosted their percentage by nine per cent and had them finish in seventh spot to set up an elimination final clash with the North Ballarat Rebels at Visy Park on Sunday.

Geelong’s eight-place finish sees them face the Western Jets in next week’s other elimination final, also at Visy Park on Sunday.