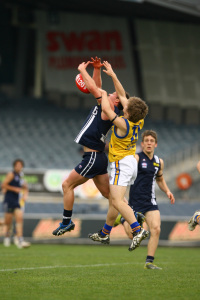 FOR Western Jets Steve Kretiuk the Elimination Final triumph against Geelong Falcons extends far beyond the club winning a final.

Kretiuk noted that everyone involved at the Jets viewed it as a tribute to player Nathan Prince, who tragically passed away in the week leading up to the final.

He said the emotional roller coaster endured by all had played out in the best possible way with the players dedicating themselves to win for their former teammate and his family.

Kretiuk noted the raw emotion had been channelled effectively into a show of respect for Prince as the players strove to make the match a memorable one for all the right reasons.

The Jets opened up a two goal lead at quarter time, but with Lachlan Fairley providing a focal point in attack, Western kicked five goals to two in the second quarter to open up what proved a match winning lead.

Geelong, with Meyrick Buchanan, Devon Smith and forwards Sam Gordon and Jai Sheehan, all performing well, kicked 6.9 to 5.4 after half time, but it was not enough to reel in the inspired Jets.

As a mark of respect to Prince, both teams observed a minutes silence prior to their game on the weekend.