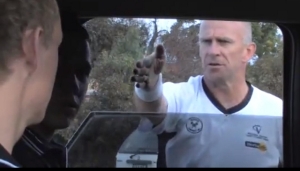 Starring in and writing the script for a road safety ad about the importance of sharing the road has helped the North Ballarat Rebels and Bendigo Pioneers win the TAC’s L120 Program Recognition Award.

The Rebels and Pioneers were announced shared winners at last night’s Morrish Medal at Etihad Stadium.

A panel of judges from the AFL, TAC and AFL Victoria picked the winners based on the quality of the ad they produced, their contribution to influencing road safety in the Ballarat and Bendigo communities, and their ongoing commitment to the L120 program.

The TAC’s CEO Janet Dore said the L120 Program was part of the TAC Cup partnership with AFL Victoria, under which the players were encouraged to practice their skills on the roads as well as on the football field.

As part of the L120 Program all teams in the TAC Cup competition were tasked with creating a television advertisement to highlight a particular road safety issue.

“In addition to creating a road safety commercial, every team’s players logged their driving practice hours on the team tally board as they built up to 120 hours practice and ultimately, getting their license,” Ms Dore said.

The Rebels road safety ad features every member of their team, as well as some coaching and support staff. In the ad, players speak about the various dangers different vehicles and motorbikes face on the roads, and the importance of sharing the road with other motorists.

The Pioneers’ ad features four players and an umpire highlighting the message about the importance of wearing seatbelts.

Ms Dore said the standard of this year’s advertisements were of such high quality they would air during Channel 9’s TAC Cup Future Stars program, and on the big screen at Etihad Stadium during the TAC Cup Grand Final on 25 September.

The TAC Cup has been running for 20 years, and Ms Dore said the competition has played a critical role in reducing road trauma amongst young drivers.

“Young drivers are still well over represented in road trauma, but this competition and the work the clubs do in their communities helps us deliver practical road safety messages and enhance young drivers’ awareness of staying safe behind the wheel,” she said.

“The North Ballarat Rebels and Bendigo Pioneers should be proud of their efforts to increase road safety and we hope their mates and families recognize the messages they are sending, and continue to drive safely.”

Vote for your favourite