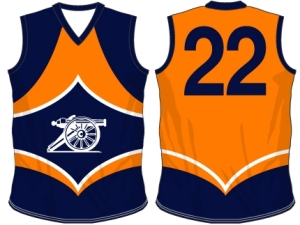 Calder have bundled a spirited Western Jets outfit from the finals in a close contest last weekend as Ben Cavarra reports.

Calder came into the game looking to get a win after a disappointing loss in the Qualifying Final versus Dandenong, while Western jets were looking to continue their great late season winning form. The ground was in perfect condition and although it rained before the game started, the ground held up very well; with the wind swirling around Visy Park.

The game was very tough in the first quarter; Jason Williams of Calder had to be stretchered off in the first five minutes, as a result of a contested tackle. After a lengthy break, Jack Sheahan opened the scoring with a goal from a great snap. Calder was dominating the clearances throughout the quarter. Tom Sheridan led from the front, playing really well, and it was goal for goal throughout the quarter, with Calder leading at quarter time by 1 point.

Western Jets coach Steve Kretiuk was pleased with his defenders efforts that quarter, but urged his midfielders to work harder.

The second term was a quarter of two halves, with Western kicking the first two goals of the quarter. Rain then struck and Calder took full advantage of it, kicking the next three goals. Brandon Ellis of the Cannons was the player who stood up throughout the quarter; he took a courageous mark and helped his side to a 10-point lead going into half time.

The floodgates started to open in the third quarter, with Western Jets dominating the centre clearances and kicking six goals to one in the term. Mitchell Turnbull had a great quarter for the Jets, kicking three goals and dominating the forward half of the ground. Western put on a lot of pressure, which caused Calder to turn the ball over a number of times, and the Jets took a 19-point lead into the last break.

Calder Cannons coach Martin Allison was quietly confident talking to his troops during the break, telling his players to back themselves in, play to their strengths, and to run and carry for the final term.

Tom Sheridan kicked a captain’s goal, with the first shot at goal in the last quarter, urging his team to give it one last shot. Western’s Jack Charleston never stopped trying throughout the last quarter; however Calder dominated the quarter from start to finish, kicking the only five goals of the term. It wasn’t all good news for the Cannons, with Jordan Angus being reported.

Western Jets put on a gallant effort throughout the game, but it was Calder who showed why they finished top of the ladder, winning the game by 15 points.