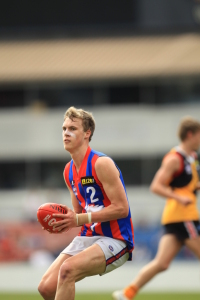 Oakleigh's barnstorming finish to season 2011 has continued in impressive fashion, with the Chargers securing their spot in the TAC Cup grand final following a gritty nine-point win over Dandenong at Visy Park last Saturday as Kane Hunkin reports.

The win cements Oakleigh their first Grand Final appearance since the side's 2006 premiership year and caps a late season form revival that's seen the Chargers rise from ninth position at the conclusion of round 15 to competitors in the final weekend of September.

Dandenong, buoyed by the week off following a narrow win over minor premiers the Calder Cannons in the first week of the finals, looked ominous early kicking the first two goals of the game. However, in a manner fitting of the afternoon Oakleigh responded to enter quarter time with a one point lead.

The Chargers were the aggressors early in the second term, kicking the first three goals. An Anthony Soriano major at the 16 minute mark of the quarter gave the Chargers a game high 20 point lead before the Stingrays again kept the game in check putting scoreboard pressure on late in the half.

Despite warm and sunny conditions, the wind proved a decisive factor, with a strong breeze blowing consistently across the ground providing its own difficulties for both teams.

Oakleigh appeared to hold the ascendency in the third term before a Dandenong purple patch led by Morrish Medallist and dual captain Alex Benbow in the middle and key goals to Jason Salopek and Jake Calvert cut the deficit to five points.

At the final huddle, the whiteboard message was fundamental for the Chargers, simply reading 'spread at stoppages' and 'tidy entries'. Oakleigh coach Greg Doyle concluded in an impassioned tone stating, "Heroes don't win finals, teams do."

Oakleigh's Seb Gotch (three goals) and Dandenong's Brett O'Hanlon asserted themselves strongly in a tense final quarter, with both players kicking two important goals each for their respective sides early in the last term. O'Hanlon's second major gave the Stingrays their first lead of the half before a clutch set-shot reply from Gotch quickly gave the Chargers back the lead at the 10-minute mark.

Despite the game remaining close in the ensuing minutes, Oakleigh would hold on to record a memorable nine point preliminary final win, with Nick Murphy's goal, coming as a result of a 50 metre penalty, sealing the victory in the matches latter stages.

The win itself reversed the two teams round 13 contest, which saw Dandenong comfortable 45 point winners.

Adam Tomlinson and Dom Tyson were solid and influential in the Chargers eventual win while Jordan Kelly and Darren Minchington featured prominently for the beaten Stingrays outfit.

Oakleigh now have the chance to claim their second TAC Cup since the league's inception when they take on the Sandringham Dragons at Etihad Stadium this Sunday.

Both sides have only competed against each other once in season 2011, with Sandringham defeating Oakleigh by 31 points.

Oakleigh coach Greg Doyle told taccup.com.au the following about their upcoming opponents after the corresponding round 3 game, “They’re a good team and if you give them room they’re going to run and carry the footy and they’re going to hurt you."