Oakleigh So Close, But Yet So Far 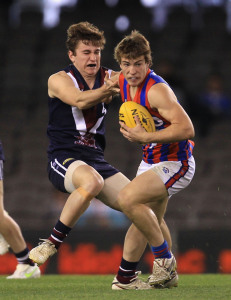 It was the dream run that almost had the story-book ending. Call it unassuming, call it purposeful, the Oakleigh Chargers embodied the widespread football cliche that suggests clubs should take it one week at a time - at least in season 2011 as Kane Hunkin reports.

Backtrack to the end of round 14 and Oakleigh were in no-man's land. 42-point losers to eventual top four side the Calder Cannons and languishing in ninth position, the Chargers were merely an after-thought in any premiership discussions.

However, in a true testament to playing each game on its own untarnished merits the Chargers turned a season, which appeared set to see them become another 'also-ran' transform themselves into September challengers and subsequently Grand Final participants.

The equation was simple late in the year. Every game was essentially an elimination final. Three consecutive home-and-away wins to end the season, which included the scalp of then ladder leaders Gippsland Power and capped off by a 130-point drubbing of the Geelong Falcons in round 17, provided the platform for finals action.

In a typical and equally symptomatic manner, the finals campaign matched the side's roller-coaster year. A gritty come-from-behind win in the first weekend against North Ballarat set the momentum. A big win against one-time flag favourites Gippsland Power and then subsequent hard-fought Preliminary Final victory against Dandenong continued to highlight the team's contrasting performances. The difference this time around, no matter which route taken, all roads led to a win. Whether, it was a scrap or canter, the result became a constant.

A goal in the first minute of the TAC Cup Grand Final to Damian Mascitti was encouraging. A six goal burst in the second quarter of the game, including three from key-forward Nick Murphy was affirming. And when Anthony Soriano kicked his first of the afternoon at the 11-minute mark of the last term the belief was self-evident.

From quarter-time through to the final change, Oakleigh looked likely. The touted midfield brigade of Jack Viney, Dom Tyson and Toby Greene were equally prominent, reflecting on the scoreboard, with the Chargers kicking 12 goals to four, to turn a 23-point first quarter deficit into a 20-point three quarter-time lead.

However, the Dragons, buoyed by a last start comeback win against Calder again showed the importance of playing the game out until its final seconds.

In a bitterly ironic way, it was an opposition player plucked right from the Charger's own backyard that played the biggest part in the eventual result. Zoned just outside of Oakleigh's reach, Murrumbeena local Fletcher Roberts' four final quarter goals helped turn the significant three quarter-time lead into an eight-point premiership win.

As the clock ticked to 27:28, the final siren sounded and the outcome was determined.

While the result reflected the highs and also cruelties of sport, the Chargers can still take solace in a committed season, which took the team to within five minutes of their second TAC Cup. Although in the record books the season renders itself unfulfilled, perhaps on November's draft day when multiple Chargers players are forecasted to enter AFL ranks, we, as neutral observers may look back at season 2011 as a defining period.

On the last Sunday of September, Jack Viney would take best on ground honours but the sought-after cup would nevertheless make its way down to the bayside region of Sandringham.