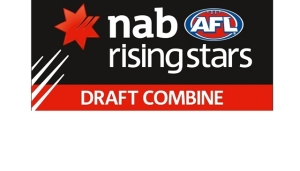 One hundred and twenty Draft prospects from throughout Australia will participate in an in-depth look at their potential to play AFL. Testing will measure athletic attributes, such as speed, agility and endurance along with refined drills to assess football skills.

AFL National Talent Manager Kevin Sheehan said the Draft Combine will have a new look at Etihad Stadium this year.

“To provide a professional testing environment a custom-made hardwood high performance floor will be laid on the Etihad Stadium surface to allow for accurate comparisons from year to year.

“We will be testing more players than ever before to give AFL clubs the best possible bank of information in the lead-up to the Draft, which will be held in late November in Sydney” Mr Sheehan said.

The following is a list of the 69 TAC Cup players invited to the Combine this week:

Part of the 13th AIS-AFL Academy intake. Averaged 17.8 disposals at 74.6% effectiveness at U18 champs. Skilful, reads play, versatile and clean. From Morningside FC.

Impressed for SA at U18 champs, has speed, agility and uses ball. Excellent one-on-one. From Tea Tree Gully FC.

Had 80% disposal effectiveness in four games for Vic Metro at U18 champs. Has good endurance, game sense, versatility, and is very competitive. From Melton JFC.

Averaged 17.2 contested possessions and four tackles at U18 champs. Has fearless attack on the ball and opponent, wins contests. U18 All-Australian. From Lucknow FC.

Layed 10 tackles and kicked four goals in U18 champs game before injured. Skills, recovery, pressure, decision-making and marking are strengths. From Euroa FC.

Averaged 18.8 disposals and four tackles at U18 champs. Exceptional leader, is clean and strong around contest. U18 All-Australian. From St Joseph’s FC.

Great ball winner, decision-maker. Has evasive, defensive skills and endurance. Ave. 24.5 touches at U18 champs, was All-Australian and Vic Metro MVP. From Wesley.

A long, penetrating left-foot kick who can play as a half-forward or wingman. Can kick multiple goals. Ran third in a Stawell Gift heat this year. From Ararat FC.

Dashing tall midfielder whose breakaway pace is his X-factor. He averaged 14.2 disposals at 70.2% efficiency at the NAB AFL Under-18 Championships this year. Selected as part of the 14th AIS-AFL Academy intake. From Carey Baptist.

Part of the 14th intake of the AIS/AFL Academy. He has excellent endurance and game sense. Had an injury-interrupted year but is now back on track. Uses the ball well, is a strong overhead mark and a good decision-maker. A real competitor who enjoys winning the contested ball. From PEGS.

Part of the 13th intake into the AIS/AFL Academy. Represented Vic Country at the U18 champs. Is strong in one-on-one marking contests, has the ability to go forward and kick a goal and has a great work ethic. From Mildura FC.

Represented Vic Country at the NAB AFL Under-18 Championships. He has a terrific work-rate and his run and carry is game-breaking. His ability to find space and work to position is very good. From Cobden FC.

Represented Vic Metro at the NAB AFL Under-18 Championships, averaging 14 possessions. He reads the ball well and is versatile enough to play back, midfield or forward. He has a penetrating kick, is a good user inside and a solid tackler. From Ivanhoe FC.

Vic Country rep at the NAB AFL Under-18 Championships, averaging 14.5 possessions and four tackles. Strengths are his work-rate, contested footy, preparation and leadership. Cousin of Jobe Watson. From Horsham FC.

Represented Vic Metro at NAB AFL Under-18 Championships, averaging 14 possessions. Good endurance and can bring others into the game by clever use of the ball. From Riddells Creek FC.

Left-footer who represented Vic Metro at NAB AFL Under-18 Championships, averaging 22 disposals, 11 contested possessions and 3.6 tackles per game. Has the ability to dispose of the ball effectively under pressure or when being tackled. He is a very clean ball handler and a good decision-maker. Awarded All-Australian honours this year. From Trinity Grammar.

Strongly built midfielder who attacks the ball and excels at clearances. Missed the NAB AFL Under-18 Championships due to injury but excelled at under-16 level in 2010, winning Vic Metro’s MVP award. Part of AIS-AFL Academy, is eligible for GWS Trade. From Eltham FC.

He is a smart user by hand or foot and can play inside or outside. Poised with the ball and very agile. From Healesville FC.

Has the ability to carry the ball and break lines. Marks well and is dangerous pushing forward. Very competitive and tackles strongly. He is the cousin of former Hawk and Bomber Mark Williams. From Rupertswood FC.

U18 Vic Country rep. Great kicking technique on both sides, good decision-maker. Has clean hands as a lead-up forward, can also play down back. From Belmont Lions FC.

Versatile Vic Country rep, strong hands overhead and a good kick and decision-maker. Strong in his approach to the ball. From Horsham Saints FC.

Athletic, versatile, reliable defender who is an effective, composed decision-maker. Eligible to go to Geelong under the father/son rule. From Leopold FC.

Great 2011 in TAC Cup and at U18 champs, winning All- Australian honours. Ball winner who makes good decisions. AIS-AFL Academy member who is eligible for GWS trade. From Beaufort FC.

Best on ground in U18 champs versus WA. Reads play well and dashes from defence. Good kick under pressure. From Phillip Island FC.

Averaged 18.2 disposals at 75.8% effectiveness at U18 champs. Well-built defender who reads the play. Team-oriented, excellent kick. U18 All-Australian. From West Coburg FC.

Rebounding half-back who can also go on ball or up forward. Reads the play very well, is a sound decision maker and is clean with his hands. From Maffra FC.

Averaged 15.6 disposals at U18 champs. Can play on talls or smalls and provides run and drive from defence. Cool and composed, good overhead. From Garfield FC.

Part of the 13th intake into the AIS-AFL Academy. Showed his versatility when he represented Vic Metro at the Under-18 Championships. Can play back, forward or midfield. He is very athletic and starting to have a physical presence with his defensive skills. From Rowville FC.

Represented Vic Metro in three games at the Under-18 Championships. Is a hard-working key position player, son of former Hawk Peter. Is very well built, a good kick and loves the hard contests. From Wesley College.

Has a terrific pair of hands and his judgment in marking contests is excellent. He is a very good left-foot kick, especially for goal, has very good endurance (14+ beep test) for his size and is also very agile. From Blackburn FC.

Has an excellent leap and is a very good overhead mark, both contested and on the lead. He is a booming kick with good accuracy. Makes smart decisions by both hand and foot. A knee injury ruled him out of NAB AFL Under-18 Championships. Father Mark played at Collingwood. From Rowville FC.

Represented Vic Metro at the NAB AFL Under-18 Championships. He is a very strong key position player who runs very hard at the contest and has the ability to split open a pack with his strong marking. From Melbourne Grammar.

Member of the 13th intake of the AIS-AFL Academy. He represented Vic Metro at the NAB AFL Under-18 Championships, averaging nine marks and 3.6 goals per game and winning All-Australian honours. He is a true power forward, very tall, athletic and good overhead. From Scoresby FC.

Represented Vic Metro in three games at the NAB AFL Under-18 Championships. He is a very athletic player who is quick and agile and good on the lead. Brother Ted plays for the Sydney Swans. From Xavier College.

An exceptional kick of the ball with either foot, he is a good decision-maker and looks a classy player in space. Has been in very good form of late. From Newtown FC.

Has a good pair of hands, either on the lead or in contested marking situations. He reads the ball well in the air and his field kicking and decision-making skills are very good. From Benella FC.

Represented Vic Country in three games at the NAB AFL Under-18 Championships, averaging 12.3 hit-outs per game in a ruckman/tall forward role. Attacks the ball with vigour in the air. He is an excellent long and accurate kick at goal. From Foster FC.

Is a long kick and strong mark, reads the game well and can be dangerous around goals. Very athletic player with good repeat speed. From Kyabram FC.

U18 champs rep who attacks and reads the ball well in the air. Very quick, competes well. From South Barwon FC.

U18 champs rep who has good pace and mobility. Can play tall and small down back, is an excellent mark and spoils well. From Doncaster Heights JFC.

Averaged 4.5 tackles at U18 champs. Kicking and vision make him an attacking weapon from defence. Good size and athletic ability, loves a contest. From Wesley College.

Athletic, versatile Vic Country rep who averaged 3.5 tackles at U18 champs. Can impact at either end with his strong marking and creativity. From Bairnsdale FC.

Averaged 14 disposals at U18 champs. A hard runner who loves to back himself, is very good overhead and has a huge leap. From Wesley College.

Averaged three tackles at U18 champs. Is a good size and can win own ball. Has a good long kick and can play well one-on-one. From Edithvale-Aspendale FC.

Provided good run and drive at U18 champs. Is competitive good overhead. U18 All-Australian whose Brother Daniel plays with Crows. From Greenvale FC.

AIS-AFL academy member and Vic Metro U18 rep. A good athlete with a great attitude. He uses the ball well and takes a very strong mark   whether down back or up forward. From Trinity Grammar.

Left-footed tall who is strong overhead and an accurate kick for goal. Promising cricketer who focussed on footy in 2011. Averaged 14 disposals, seven marks and has kicked 34 goals this year for Dragons.

Athletic, raw ruckman. Shows ability below the knees and averaged 11.4 disposals, four marks and three clearances for the Ranges this year. From Yarra Valley GS.

AIS-AFL Academy member and Vic Country U18 rep. Is good below the knees and disposes effectively. Shows great character and leadership, averaged 12.6 disposals, six marks for the Stingrays this year. From Somerville FC.

All-Australian U18 ruckman who is mobile and excels at stoppages. Dangerous up forward with his marking and speed. Averaged 11.7 disposals and four marks for the Knights this year. From Macleod FC.

Tall, versatile, athletic player who reads the play and uses his body well and has good skills. Had 21 touches and kicked three goals in a TAC Cup final. From Melbourne Grammar.

Shows good athletic ability in the ruck and at marking contests, which has certainly been a highlight. Works hard to play his role within the team and is very unselfish. From St Joseph’s FC.