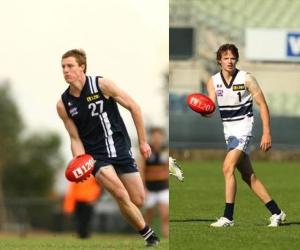 Two current TAC Cup players have been guaranteed an AFL spot next season under the father son rule, which were finalised by the AFL on Monday.

Dylan Buckley (Northern Knights) and Jed Bews (Geelong Falcons) will find themselves at Carlton and Geelong respectively after father-son nominations were confirmed by both clubs.

Dylan is the son of 164 game Blue Jim Buckley, who was a best and fairest winner and three time premier player at Carlton between 1976 and 1990.

Jed is the son of former Geelong captain Andrew Bews, who played 207 games with the Cats between 1982-93 before ending his career with five seasons at the Brisbane Lions.

Both clubs have confirmed they will select these players with their last available selection in the 2011 NAB AFL Draft, to be determined once the club has finalised its selection numbers for this year’s Draft.