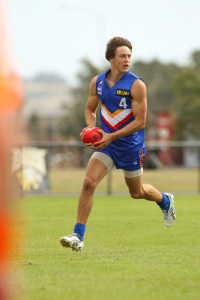 HE might be surrounded by potatoes at the family farm in Gembrook, but Damien Volta is no spud when it comes to his sport.

Volta, 18, is already well known in the area as an Eastern Ranges midfielder and AFL Draft hopeful, but he boosted his draft claims last Tuesday by winning the 100 metres sprint at the School Sport Victoria Secondary State Track and Field Championships.

Volta ran the 100m final in 11.8 seconds at the Albert Park course; a time which he doesn’t think is all that impressive.

“I almost missed the race,” Volta said. “My mate picked me up a little bit late.

“I ran straight over and was ready to go.

“I just ran, I pretty much didn’t think about it and it was all over just like that.

“It was a slow race because there was a pretty big headwind on the day; my personal best I ran at the level before and it was a 10.8.”

Speed is one of Volta’s great weapons on the footy field as well as the track.

“That’s my best attribute when it comes to footy, my speed, so I can break the lines and open the game up a bit.

“I played the whole year through the midfield, and that was really good.

“I suppose these days any position is a running position the way the game is going.”

Volta played every Ranges game this season with the first Eastern match against the Geelong Falcons standing out to him as his best effort.

His complete season repeats the same achievement from 2010, which is a rare feat at the TAC Cup level.

“For the Ranges it was a little bit disappointing,” he said. “We were always going to get that once we lost our Vic boys and we had a few big injuries, but personally I’ve really enjoyed the season.”

His hard work paid dividends when Volta was selected to play in the VFL for the Box Hill Hawks as their 23rd man against the Bendigo Bombers.

“The experience was amazing,” Volta said. “It opens your eyes.”

“Playing one game in the VFL makes you want to strive to get there and play against those blokes again.

“People say it isn’t such a step up, but it’s a huge step up.

“You could be athletically better than everyone else there, but they’re all just so smart and so much stronger.

“You could be quicker than a bloke, but he’s two steps ahead of you; it’s unbelievable.”

Click HERE for the full story from Jarrod Potter from the Star Newspaper.