Ready For Redemption After Injury 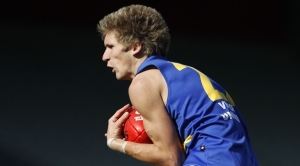 THERE'S a shoe rack in one corner, brimming with runners, boots and the odd pair of thongs. There's a pile of magazines by the table tennis table, bikes hanging from one wall and a Swiss ball rolling around underneath them.

The small home gym is pushed up against another wall, squeezed between a bright blue drum kit and an old, brown hairdressing mirror. The sun is out, shining through the open garage doors at Elliott Kavanagh's house.

Kavanagh didn't expect to spend much of the last year here. He had plans for this season: to play football for the Western Jets, for Vic Metro, for Essendon Grammar and the Australian Institute of Sport squad. This time last year he was the sort of on-baller every AFL club wanted: quick, and able to keep running. He could zip in and out of packs, beckon the ball to his hands and take it with him. He could see space, scoot into it and put the ball into places where his teammates could easily reach it. He wanted to enjoy the last little bit of life as a teenage footballer, but his body had other plans.

Because of what he had done - and what his left hamstring has barely let him do since - he is the curiosity of this year's draft, the kid that clubs can't be entirely sure what to do with. Can he still do all the things he used to do? Have other players edged past him? Is his leg better now, or will it continue to trouble him?

Kavanagh is intriguing, and he knows it; glancing up during his medical examination at last month's combine, he found 20 doctors and physios peering down at him. ''It was a little bit overwhelming,'' he said. ''It's like they don't really see you, you're just body parts.''

Click HERE for the full story from The Age's Emma Quayle.