Road To The Draft - Todd Elton 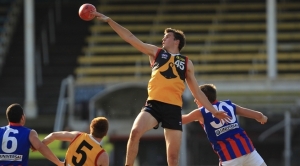 TODD Elton has yet to play a game of league footy. He doesn't even know what club's colours he will be donning in 2012.

But football has been all-consuming for several years and the 18-year-old from the Dandenong Stingrays will enter the AFL system having had the perfect grounding.

Elton has played for Frankston High School, three different junior clubs - Tyabb, Frankston Dolphins and Somerville - Vic Metro and Vic Country and has been through the AIS program.

As part of the AIS program, he spent a week at Carlton. That was the eye-opener that perhaps more than anything has him ready for whichever club calls out his name at next week's NAB AFL Draft.

"I got to see the environment," he said in a recent interview with AFL.com.au.

"Off the field they are really relaxed and talkative, which was good, but when it came down the training and the weights it was all business. They know how to switch on."

Elton cuts an impressive figure. Polite, thoughtful and well-spoken, he would fit right in at a league club. On first impression, he would appear to have the makings of a future leader and he has already held leadership positions with the Stingrays.

But when you chat, he also makes it clear that he has that bit of mongrel in his make-up. Like the blokes at Carlton, there's time for banter and time to work.