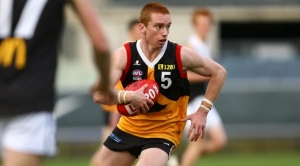 IT says a lot about Alex Benbow that he won the Morrish Medal after being told there were some chinks in his game that he needed to repair if he was to have a chance at an AFL career.

Benbow said that before last last season he was an outside midfielder who struggled to win his own ball and the Dandenong Stingrays coaching panel knew their ball magnet needed to add to his game.

He took it on board and became one of the Stingrays' prime movers in their charge to a preliminary final, winning the league best and fairest award along the way.

But the Beaconsfield product is still no certainty to be picked up at Thursday's AFL national draft.

"You obviously think about it but you have to just wait it out."

Benbow's manager, former Essendon player Adam Ramanauskas, has fielded some interest but if Benbow's name is not read out he is a strong chance of being put on a rookie list.

Stingrays coach Graeme Yeats believes an AFL club would be gaining a good attitude as well as a sound skill set if they took a punt on the 173centimetre Benbow.

Click HERE to view the full story for The Weekly's Brad McGrath.