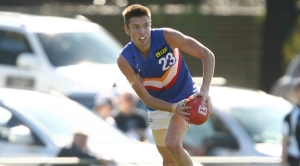 EASTERN Ranges will experience the AFL draft in two distinct ways when teams make their annual selections this Thursday.

The first way will be where the Ranges' two certainties are selected, with possible first pick Jonathon Patton a near certainty to be one of Greater Western Sydney's opening selections.

The Giants have the first five selections of the draft along with a host of picks thereafter and Patton is sure to be selected in that section.

Ranges teammate Hayden Crozier is another player who will go in an early pick, although whether it will be to the Giants or another AFL side will be decided on the night.

But once those two are taken the Ranges' night will change, as the struggling side had few clear AFL-bound players this season.

Ranges region manager Anthony Parkin said 196-centimetre utility Michael Bussey had caught plenty of attention over the past two years but his inconsistent play this season had left his draft status uncertain.

The Australian Institute of Sport squad member played for Vic Metro during the under-18 carnival but during the TAC Cup season didn't kick on as hoped.

Parkin said Bussey still remained an exciting prospect in the eyes of many recruiters because of his height and versatility.

"He has gone from a top-20 pick to a late pick or even a rookie list player," he said. "Athletically he is very capable and his attitude to training and to this program has been terrific.

Click HERE for the full story for The Weekly's Roy Ward.