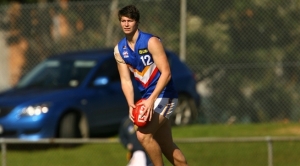 HE'S operated on some of the most expensive footballing flesh on the planet, including Barcelona captain Carles Puyol and AC Milan's Zlatan Ibrahimovic.

After suffering pain from patella tendinopathy, also known as jumper's knee, for more than a year, Patton travelled to freezing Sweden to seek a remedy.

The path he took to remote Umea is well worn as the cream of world football seeks out the man regarded as No.1 in his field.

Back on home this week the 18-year-old Giants forward is relieved after battling an injury that wasn't going away.

"Having that procedure done by the best in the world is a massive boost to my confidence," Patton said.

Less than a week after the surgery the lingering pain that followed his every step on the football field is no longer there.

Click HERE for the full story from the Daily Telegraph's Neil Cordy.