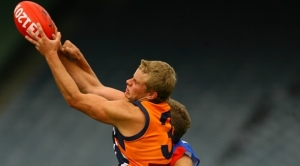 BRANDON Ellis, Richmond's first pick in the 2011 NAB AFL Draft, is likely to be entrusted with kick-in duties in his first year on the Tigers' list.

Ellis, 18, is expected to be named in the Tigers' line-up for their now traditional round one clash against Carlton at the MCG.

If he's near the ball, he's been given permission by the coaches to take the kick-in.

Ellis, who was taken at No.15 by the Tigers from the Calder Cannons, said today he would fall behind teammates such as captain Chris Newman and fellow half-back Bachar Houli in the kick-out pecking order.

"It just depends who's closest to the ball," Ellis said. "If it's a slow play, Chris Newman will usually take the kick."

Ellis looked bashful when asked whether he might try a torpedo from full-back. Adelaide coach Brenton Sanderson revealed this week that he would be instructing his players to use torpedoes to break defensive presses.

Click HERE for the full story for afl.com.au's Paul Daffey.