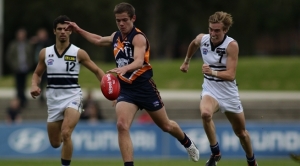 A well prepared Calder Cannons team have shown the Northern Knights what is required to be successful in the 2012 TAC Cup competition.

The Calder Cannons led from the start and never let the Knights get their nose in front.

The first quarter produced some scrappy footy, with both teams applying a lot of pressure. However, it was the Cannons straight kicking that provided them with a 28 point lead at quarter time.

The second quarter opened with Jesse Boyd kicking the first goal within 20 seconds, giving Calder a controlling lead. Boyd continued to provide the Calder Cannons with a strong target in their forward line and went on to kick 5 goals for the day.

The Knights made a small run at the Cannons in the second term with Nick Vlastuin kicking the club’s first goal part way into the quarter, followed by another two quick goals by his teammates.

Lachlan Plowman, Jayden Walker and Jack Sheahan assisted with some hard footy for the Cannons, picking up numerous contested possessions and disposing of the ball effectively.

The fourth quarter saw the teams go goal for goal, but the Northern Knights could not make up for their slow start to the game.

Calder Cannons coach Martin Allison believes their efficiency in front of goal was the deciding factor for the game.

“All other key stats said the two sides were even except the scoreboard. We were more accurate with our kicking for goal,” Allison said.

Calder this weekend play Sandringham at Highgate Rec Reserve, whilst Northern head to Visy Park to take on the Eastern Ranges.