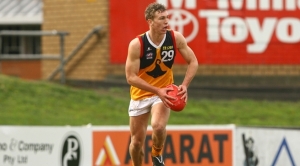 The Greater Western Sydney GIANTS are pleased to announce that five of their young players have re-committed to the club until the end of 2015.

“We are delighted these five talented young players have agreed to re-commit to the GIANTS. It’s a great endorsement of the club and its direction and we look forward to them playing a big part in its future,” Matthews said.

“We are currently in discussions with a number of other young players and look forward to more positive announcements in the near future as we embark on what is an exciting journey for this club.”

Shiel, Bugg, Kennedy and Tomlinson have all played senior football for the GIANTS in 2012 and Buntine will make his AFL debut against the Brisbane Lions at the Gabba this Sunday.

“It’s a tremendous show of faith in the GIANTS by these young men and the direction this club is heading in. I congratulate them all on what they’ve achieved so far and look forward to them having long and successful careers with the GIANTS,” Sheedy said.

The GIANTS secured both Dylan Shiel and Tom Bugg in mid 2010 under the AFL list establishment rules, which allowed the club to pre-select twelve 17-year-olds. Shiel relocated to Sydney that November and played for the GIANTS in the NEAFL in 2011, winning praise for with his attack on the contested footy as a tough on-baller. Shiel has played every game for the GIANTS in 2012.

Bugg remained in Melbourne to finish school and captain Caulfield Grammar. Bugg moved to Sydney in November 2011 and has already impressed at the AFL level securing himself a NAB Rising Star nomination in Round 5.

Adam Kennedy was pre-listed by the GIANTS in October 2011 as a player that had previously nominated for the draft. Kennedy captained of the Western Jets in the TAC Cup in 2011 as an overage player. An elite athlete, Kennedy’s run off halfback has been impressive in his six games for the GIANTS this year.

Adam Tomlinson was selected by the GIANTS with pick nine at 2011 NAB AFL Draft. A member of the 2011 AIS AFL Academy, Tomlinson was drafted from the Oakleigh Chargers. A gifted runner for his size, Tomlinson is praised as a versatile player capable of playing back or forward and has played a variety of roles for the GIANTS in his four games in 2012.

Matthew Buntine was drafted by the GIANTS in 2011 with pick number five from the Dandenong Stingrays and is set to make his AFL debut this weekend. An astute-decision maker, Buntine is a tough defender who uses the ball well.