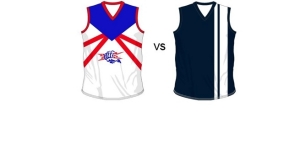 TAC Cup travels to one of football’s historic grounds this weekend when Gippsland Power takes on the Geelong Falcons at Victoria Park.

The Power enter their Country Round contest as ladder leaders after a comprehensive 88 point win over the Eastern Ranges.

“I have been really happy with our start to the season; the boys are getting results for all their hard work preseason. They set their expectations very high early and have been very impressive.”

The Club’s strength lies in their depth of talent and the team’s consistent on-field performances.

“We have been a very even side all year but if I had to name some standouts they are Nick Graham, Tim Membrey, Tom Muir, Josh Scott, Anthony Tipungwuti, Jack Johnstone, Ryley Hall, Matt Northe, and Josh Cashman.”

Stevens has taken the knowledge and experiences learnt from playing at the highest level and adapted it to his first class Under 18 team. His scouting of the opposition has provided the Power with a fantastic asset.

“I put a lot of time into my opposition and preparing our guys to how I think they will play. We like to focus on our game plan and make sure we win the contested ball. This week we need to tackle well and slow Geelong down as they are a very fast and skilful side,” Stevens said.

The Geelong Falcons approach their contest against Gippsland sitting in 7th place on the competition ladder. The Club enters on a high after a 42 point win over a top four team, the Calder Cannons.

Falcons Coach, Andrew Allthorpe is happy with the progression of his young list.

“We knew coming into the season that our list would be dominated by bottom age players. So in terms of expectations we knew they would take time to grow and develop at the TAC level.

“As the season has progressed our group has learnt that they need to bring a consistency of effort every week if they want to get a positive result.

“Each week they are learning to handle different situations and as the season progresses, so has our improvement and understanding of what is required.”

Although the whole group has shown great improvement, Allthorpe was able to identify a few leading players within his side that have helped the team in their success.

“Cameron Williams in the ruck has competed extremely hard week in and week out.

“Mason Wood up forward has provided a great target for us as a senior player, and strives to improve each week.

“Zak Sherman moving from a back pocket last year into the midfield has shown he can win his own ball and balance this out with his ability to spread.

“Of our very strong bottom age group, Lewy Taylor has been the stand out. After a very strong preseason he has been committed to learning and improving his game each week.”

Geelong approaches their contest against Gippsland this weekend in a positive frame of mind, hoping to take a lot from the challenge.

“We are really looking forward to playing against Gippsland, as they have been the benchmark, and we see it as a great challenge. We see Gippsland as a very even side across the board. They look a very mature side who look physically strong around the ball. They have some dangerous forwards who our backs will have to work extremely hard against to stop them scoring,” Andrew Allthorpe said.

Several players from both sides will be using this match as a platform to impress selectors for the Victorian Country Team. The side’s first U18 National Championships match takes place next weekend against NSW/ACT.